Tax reform took effect in 2018, and this is the first tax season in which taxpayers will have a chance to see the true impact. Already, early signs have been troubling for many, as recent IRS reports show that the average amount of tax refunds paid out so far has fallen from last year's levels at this time and looks much weaker than the averages from past tax seasons.

The latest reading from the Internal Revenue Service shows that only 11.4 million taxpayers have gotten refunds so far this tax season, down by more than 2.1 million from the number of refunds issued as of the same week in February 2018. The average amount has fallen almost 9% to $1,949, resulting in almost $6.7 billion less in total refund payments made year to date.

As you can see below, the news looks even uglier when you look at overall refund averages for the past several years. At first glance, it looks like 2019 could be a terrible year for refunds. 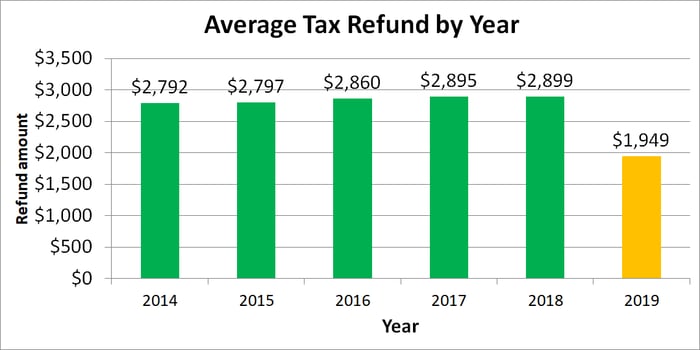 Data source: IRS. Chart by author. Year indicates when return filed. 2019 number is as of Feb. 8; other years are as of latest date available.

Many have blamed tax reform for the shortfall in refund amounts. Although withholding tables were adjusted to reflect lower tax rates, most workers didn't adjust their withholding to reflect changes in some popular deductions, such as the limitation on state and local tax deductions. That could result in many taxpayers having had less money withheld, shrinking the size of their refund.

However, there's one potential saving grace: Refunds historically have trended lower early in the tax season before bouncing back later in the year. In 2018, average refunds climbed more than $750 between mid-February and when final numbers were available. Numbers for previous years were similar, topping $850 in 2017. The reason: Those claiming key credits aren't allowed to receive refunds until later in February, and so those later returns -- most of which have relatively high refund amounts attached to them -- have tended to boost the average considerably.

A Foolish Take: Why Tax Refunds Might Not Shrink as Much as Feared @themotleyfool #stocks Next Article
Current