Please ensure Javascript is enabled for purposes of website accessibility
Log In Help Join The Motley Fool
Free Article Join Over 1 Million Premium Members And Get More In-Depth Stock Guidance and Research
By Kailey Hagen - Updated Jan 17, 2020 at 9:32AM

Watch out for these errors and get your return right the first time.

The holidays are over, and everyone's least-favorite time of the year is almost here: tax season. You might feel tempted to hurry through your taxes so that you can move on to other things, but rushing can lead to mistakes that cost you a lot of money (or worse, bring the IRS to your door). Here are seven of the most expensive tax errors you definitely want to avoid this year. 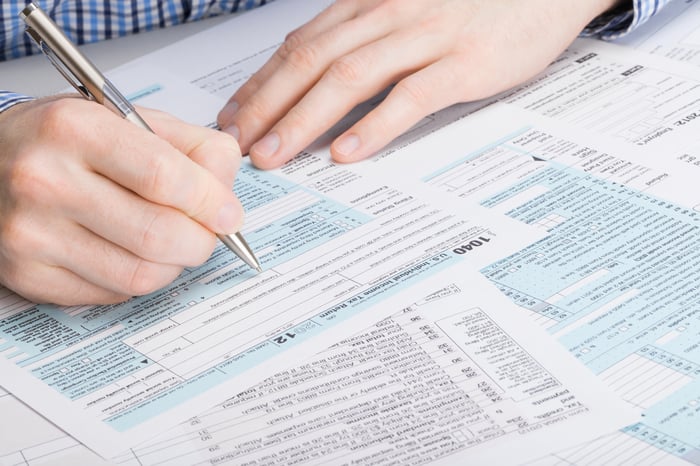 1. Not filing a tax return if you earned more than the standard deduction

Failing to submit a tax return if you've earned more than the amount that pertains to you will likely attract the IRS. Then, it'll make you pay what you owe plus a penalty equal to 5% of your tax bill for each month that you're late, up to a maximum of 25%.

Even if you earned less than the standard deduction for your filing status, it still might make sense to file a tax return if you had federal taxes withheld from your paycheck. Filing a return is the only way to get this money back as a refund, so skipping the tax paperwork could actually cost you money.

The consequences of paying a tax bill late are not as severe as the consequences for filing your tax return late, but you'll still owe an extra 0.5% of your tax bill for every month that you don't pay, up to a maximum of 25%. If you want to avoid this, you must pay by April 15, 2020, or work out a payment plan with the IRS.

There's an exception to this penalty for those who pay 90% of their tax bill by the April 15 deadline, request an extension, and pay the remaining 10% by the extended deadline, which is Oct. 15, 2020. You may still have to pay some interest on your outstanding balance after the April 15 deadline, though. Explore this option if you're unable to pay your full tax bill on time.

3. Hiding income from the government

You might think you don't have to report income you earned from your side business because you never got a 1099, but that's not true. Companies don't have to give you a 1099 unless they paid you at least $600 during the year, but that doesn't mean you don't owe taxes on the money. And it doesn't mean the government doesn't know that you earned that money. The company will still report how much it paid you, and if you fail to do so as well, you significantly increase the likelihood of an audit.

4. Taking tax deductions and credits that you shouldn't

Don't have any children? Then don't claim the Child Tax Credit. Don't own a business? Then you can't write off purchases as business expenses. Doing these things might give you a larger tax refund at first, but there's a good chance it also brings an audit that could end up costing you a lot more.

5. Not taking tax deductions and credits you qualify for

Your tax filing software or accountant can help make sure you claim all the deductions and credits that you do qualify for, including deductions for contributions to tax-deferred retirement accounts. Skipping this step because it seems complicated or because you're not sure that you'll get any money back could end up costing you hundreds or even thousands of dollars.

Credit and deduction rules change from year to year, so check the qualification requirements for every year you plan to claim one to ensure that you still qualify.

6. Getting rid of important tax documents

You probably know that you need to keep your W-2s and 1099s for filing your returns, but that's not all you should keep. Also hold on to any receipts, credit card or bank statements, or other documents pertaining to tax deductions and credits you plan to claim. For example, save receipts for office supplies for your business if you plan to write them off, to prove to the government that your deduction is legitimate.

You don't have to submit this paperwork with your return, but you'll need it if you get audited. Keep all your tax documents in a folder for at least three years -- or seven, if you filed a claim for a bad-debt deduction or a loss from worthless securities. Some people keep their tax documents indefinitely in case they need to prove their income or deductions at some point in the future.

Everyone has the choice of claiming the standard deduction discussed above, or itemizing deductions. The latter could be the smarter choice if you believe your allowable itemized deductions will exceed your standard deduction for the year. If you're using tax filing software or having an accountant do your taxes, you shouldn't have to worry about whether to itemize or not because your accountant or software will do the calculations both ways to figure out which is better for you.

No one likes taxes, but you know what's even worse? Audits. And losing money. So take your time, do it right, and avoid the seven mistakes listed above.