Please ensure Javascript is enabled for purposes of website accessibility
Log In Help Join The Motley Fool
Free Article Join Over 1 Million Premium Members And Get More In-Depth Stock Guidance and Research
By Dan Caplinger - Jan 19, 2020 at 8:01AM

Find out what many think is the most regressive tax on the books.

Paying taxes is never fun, but one thing that makes many taxpayers more comfortable is the idea that the more money you make, the more in taxes you'll pay. The U.S. has a relatively progressive income tax system, with multiple tax brackets that go up as your income rises.

However, when it comes to Social Security payroll taxes, the situation is much different. The federal government takes money out of every employee's paycheck at the same flat percentage rate of 6.2% for Social Security. Moreover, there's a maximum amount above which no additional tax gets charged -- essentially meaning that the rich get to stop paying this tax at some point during the year even as those of more modest means end up paying it all year long. Below, we'll look at how this tax works and why many think it unfairly favors the wealthy. 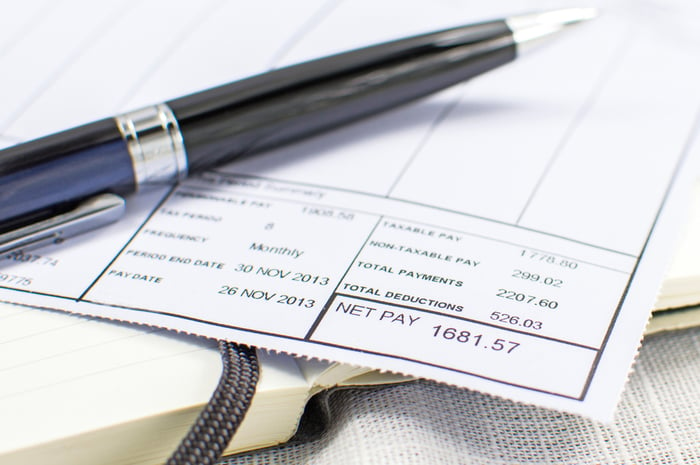 What the wage base means for Social Security taxes

The reason why many consider Social Security payroll tax withholding to be regressive is that the tax gets imposed only up to a certain amount in earnings. Known as the wage base, this amount is $137,700 for 2020.

Once your earnings for the year exceed that $137,700 amount, you'll no longer have to pay any additional Social Security payroll taxes. That means that some ultra-high-income taxpayers have already finished paying their Social Security taxes for the year, while others will be done paying in the near future.

Believe it or not, these figures are actually a little bit later in the year than they were in 2019. That's because the wage base tends to move up each year in line with inflation. For instance, the wage base last year was $132,900, and that resulted in $1 million earners finishing up with their Social Security taxes on Feb. 18 -- two days earlier than this year.

Yet there's an argument against lifting the wage base as well. Currently, the maximum amount of income on which Social Security taxes get imposed also defines the maximum amount of earnings that a worker gets credited for in determining lifetime Social Security benefits. That ensures that everyone paying into the system gets a corresponding positive boost to their future benefit as a result of their paid taxes. If you change the rules to force the rich to pay more without getting anything extra in their monthly checks, it would fundamentally change the way the system has worked for decades. Those favoring a wage base increase argue the advantages outweigh any disadvantage of that change to Social Security, but it's a bone of contention among policymakers.

Current law is almost certain to continue at least through 2020 if not beyond, and that means few changes to Social Security tax laws are likely to happen. That'll leave top earners with the ability again this year to stop paying Social Security taxes for a long period, but for those making $137,700 or less, that 6.2% Social Security payroll tax will hit their paychecks from January to December.