Please ensure Javascript is enabled for purposes of website accessibility
Log In Help Join The Motley Fool
Free Article Join Over 1 Million Premium Members And Get More In-Depth Stock Guidance and Research
By Maurie Backman - Jan 22, 2020 at 9:48AM

Here's why a lump sum from the IRS isn't actually something to celebrate.

If there's one thing most Americans can agree on, it's that taxes are a drag. The silver lining, however, is getting a lump sum of cash from the IRS in refund form once you've gone through the headache of filing a return.

Most tax filers get a refund each year, and new data from tax prep company Jackson Hewitt reveals that 61% of Americans anticipate collecting one in 2020. But before you celebrate that incoming windfall, you may want to think about what you're giving up in order to get it.

It's nearly impossible to break even on the tax-filing front. Generally, you'll owe the IRS some amount of money when you file your tax return, or it will owe you some. Your goal should actually be to get as close to breaking even as possible, because that means you estimated your tax liability just right and, for the most part, received the amount of earnings you were entitled to based on your income. 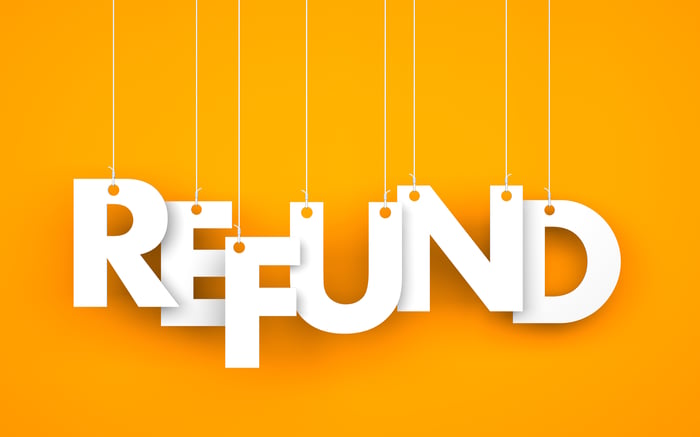 But because there are so many factors that go into calculating tax liability, it's kind of unusual to get a $30 refund, or owe the IRS a mere $40 when you file a return. Usually, refunds or underpayments are much higher, and as such, most filers would rather receive a large check than write one out.

Here's the problem, though: When you get a significant tax refund, what that really means is that you gave up access to a portion of your earnings needlessly throughout the previous year. Worse yet, you gave the government an interest-free loan that it benefited from, but you didn't. And that hardly makes sense.

Don't give up that money

If you're not convinced that getting a large tax refund is a less-than-positive thing, think back on the past year: How many times were you forced to scramble to pay a surprise bill, and how much credit card debt did you rack up when your paychecks couldn't cover your expenses? Now, imagine that instead of getting, say, an $1,800 refund this year, you'd gotten an extra $150 in your paycheck every month last year. Wouldn't that have made life exponentially easier?

One major misconception about tax refunds is that the cash you receive from the IRS is free money. But it's not free money -- it's your money that you never should've given up in the first place.

If you do wind up getting a sizable refund this year, then it could pay to take a look at your tax withholding and make some adjustments so you're able to collect more money in your paychecks as you earn it. If you're worried that making that change will cause you to owe the IRS money during next year's tax season, take that extra cash in your paychecks and stick it into a savings account so it's there for you when you need it. If unavoidable expenses pop up, you can tap that account to cover them and avoid debt. Otherwise, you can leave that money alone, let it earn interest, and then, worst-case, use it to pay the IRS if you need to. That way, you get flexibility with that money rather than letting the government borrow it from you for nothing in return.