If you do, you stand to lose a lot of money.

The April 15 tax-filing deadline will be here before you know it, and if you're already struggling to complete your return, you may be toying with the idea of requesting an extension. The good thing about tax extensions is that you don't need a specific reason to qualify for one. All you need to do is submit Form 4868 by the April 15 deadline, and the IRS will generally grant an extension without asking questions.

It makes sense to get a tax extension if any of the following apply to you:

But many people who get tax extensions fail to realize one key thing: The only thing that an extension will do is give you an extra six months to file your return. It won't give more time to pay your taxes, and if you owe the IRS money, you'll incur costly penalties if you don't pay up by the April 15 filing deadline. 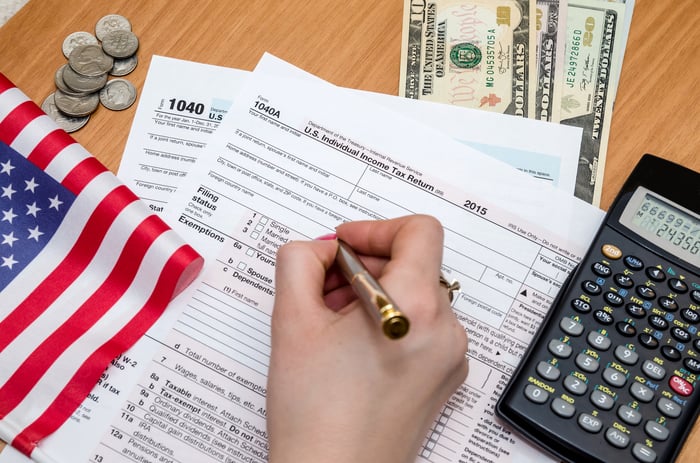 Though most people receive a refund from the IRS when they file their returns, you may be in that smaller percentage who owe the IRS money. And if that's the case, you should know that a tax extension won't buy you more time to scrounge up that cash.

In fact, if you don't pay your tax bill in full by April 15, you'll incur interest and penalties on the amount you owe. Specifically, you'll be hit with a late-payment penalty equal to 0.5% per month or partial month your tax bill goes unpaid, up to a total of 25%.

Now if you do owe money, one way a tax extension will help is by letting you avoid the failure-to-file penalty, which applies if you owe the IRS money but don't submit your return by the April 15 deadline. If that happens, you'll be hit with a penalty equal to 5% of your unpaid tax bill per month or partial month your return is late, up to a maximum of 25%. As you can see, the failure-to-file penalty is 10 times the size of the late-payment penalty, at least on a monthly basis, so if you're convinced you'll owe the IRS money and won't have your return ready by April 15, an extension is the way to go.

On the other hand, if your sole reason for getting an extension is to buy yourself more time to pay your taxes, you might as well go ahead and submit your return on April 15, all while coming up with a plan to pay off your tax debt as quickly as possible. The good news is that the IRS will work with you if you can't pay in full, generally by letting you use an installment agreement.

Another thing: The sooner you prepare your taxes, the sooner you'll know whether you owe the IRS money or not and the sooner you can start devising that plan (either alone or with the help of an advisor or accountant) to pay off whatever money you owe. Therefore, while a tax extension makes sense under certain circumstances, you're usually better off getting your taxes done on time or even early.