After leaving them out, some lawmakers want to put them back in.

The U.S. government has taken huge measures to try to offer relief to Americans in the wake of the coronavirus pandemic. Multiple rounds of legislation have sought to funnel trillions of dollars into the hands of ordinary people at the time of their greatest need.

The most immediate help Americans hope to get soon will come in the form of coronavirus stimulus checks that lawmakers promised in late March. Most adults who qualify under income guidelines will receive $1,200 from the federal government, while families with children will get an extra $500 for each eligible child. 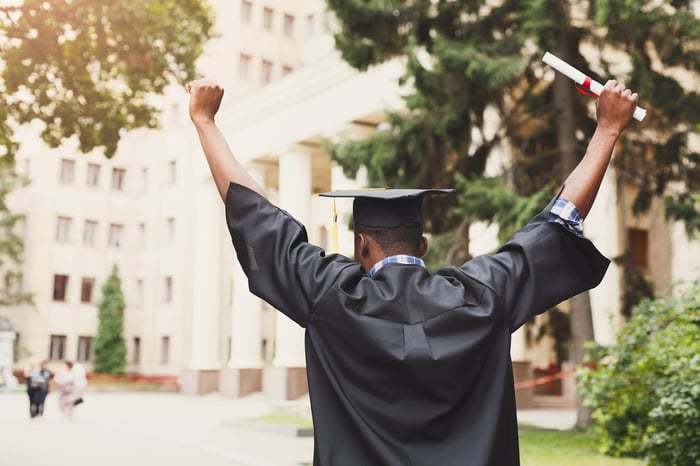 Caught in the middle

Many students age 17 to 23 find themselves stuck in the middle. They can't qualify for the $500 payment for their parents because they're too old. Yet the rules for dependents apply for college students under age 24, so if their parents still provide half or more of their financial support, then they'll often get locked out of the $1,200 payment.

The fix some lawmakers are looking at

Appalled by leaving out tens of millions of college students, some lawmakers are looking at trying to remedy the situation. There are a couple ways that could be done:

So far, the first idea appears to be gaining more traction. Several U.S. senators have indicated their support for a bill extending the $500 child stimulus check provisions to college students and others not included under the original legislation. With talk of a possible fourth round of economic support potentially moving through Congress in the next month or so, it's likely that such a provision could become part of the next new stimulus law.

It's hard enough to make financial plans in today's challenging economy without the uncertainty of Washington politics added to the mix. Yet while college students probably shouldn't expect to get stimulus checks at the same time as others, there's hope that they'll eventually get included in stimulus efforts. Whether that comes now or when you're filing your 2020 tax returns early next year remains to be seen, but urging lawmakers to include college students in the stimulus bill could prompt action sooner rather than later.