The coronavirus pandemic has had a crushing impact on the economy, and the federal government is working hard to get money into Americans' hands. Yet while nearly everyone waits with bated breath to get their $1,200 stimulus checks from the government, there's been a big drop-off in people tapping into another cherished source of much-needed money: tax refunds.

Tax refunds have traditionally been a huge economic booster for ordinary consumers. Taxpayers received more than $320 billion in tax refunds for the 2018 tax year, with 111.8 million people claiming an average of $2,869 each. That's more than double the amount of the $1,200 stimulus checks Americans are waiting on. Yet one consequence of the extension of time to file 2019 tax returns until July 15 has been that fewer people have received those tax refunds so far this year. Below, we'll look more closely at the figures to see what's happening. 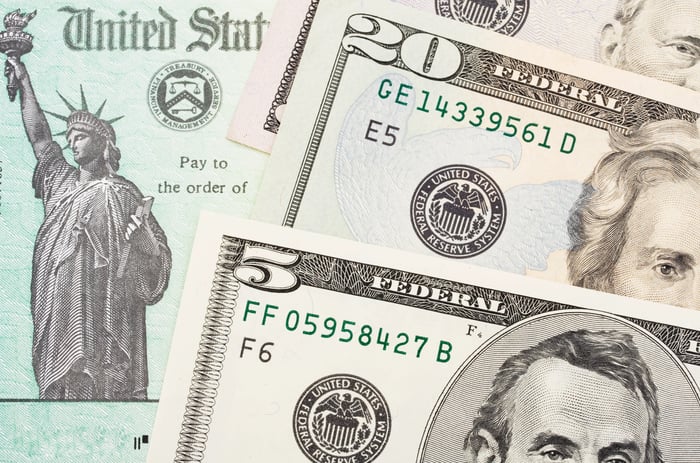 A big drop in tax filing -- and refunds

The IRS granted taxpayers three extra months to file their returns, and hard-hit Americans have taken advantage of that extra time. The number of returns that the IRS had received as of April 10 was just under 104 million, down 13% from the number as of the same time last year. The number of processed returns was lower still, amounting to just 97.8 million, lower by more than 15% year over year.

At the time that the extension was announced, many assumed that those receiving refunds wouldn't do anything differently. After all, when the IRS has your money, it's in your best interest to get it back as soon as you can.

But even the number of refunds has fallen dramatically. Only 77.25 million people had received refunds as of early April. That's down by almost 7.2 million from the same time in 2019. Moreover, although the average refund per taxpayer is actually up about 2% to $2,850 from last year's average of $2,795 as of mid-April 2019, the total amount of refunds that the IRS has paid added up to just over $220 billion -- down by about $15.6 billion from this time last year.

Is there a good explanation?

One legitimate reason taxpayers might delay filing to get their tax refunds involves the stimulus payments themselves. Stimulus checks are subject to income limitations based on the most recent tax filing information that the federal government has. If you haven't yet filed a tax return for 2019 and you would qualify for a stimulus payment using your 2018 income, then holding off on filing gives you an easy way to get your stimulus check.

In particular, if your income went up in 2019 and is high enough to force you to give up some or all of your stimulus money, not filing could be the only way you'll get a check. Delaying a refund of $2,850 for a month or two is worth it if it means an extra $1,200 in stimulus payments in your pocket.

For some of those 7 million taxpayers, that might be a reasonable explanation. But what's likely for many of them is that they don't have the resources to claim their refunds in a timely manner. Tax-help sources like the Volunteer Income Tax Assistance program have had to stop offering services in some areas due to the pandemic, leaving low- and middle-income taxpayers without the resources they usually rely on to prepare their returns. The closure of public libraries in many areas has also limited access to tax forms and online access that many count on having at tax time.

Get some more stimulus into the economy

As important as stimulus checks are for ailing families, the prospect of freeing up an average-size refund of $2,850 or more is worth the effort of filing a return sooner rather than later. Unless you'll jeopardize your stimulus payment by filing for the 2019 year, getting your return completed and sent to the IRS is the best way to get your hard-earned money coming to you as quickly as possible. That's the kind of tax planning that pays its own rewards.