Planning for marriage is a momentous affair that many dream about, but there is one item that's often neglected during the preparation process: taxes. If you're planning for that special moment and haven't thought about the financial impact beyond the wedding, you could be stuck with an unexpected marriage tax penalty when you file your tax return.

New filing status may come with a new tax rate

If your spouse has a huge tax bill that could negatively impact your finances, it may work in your favor to file separately. But most couples automatically opt to file their taxes as a married couple to maximize the number of benefits they qualify for.

Moreover, the marriage tax penalty is a moot point for many couples because of this incredible benefit: expanded income ranges for tax brackets. In many cases, couples will receive a marriage bonus because more of their income may qualify for lower tax rates. The married filing jointly tax bracket ranges are just about double that of single filers -- until you reach the highest tax brackets.

It's for those high-earning couples that the marriage penalty often starts to appear. However, as you'll see below, there are times when even those with lower incomes face a marriage penalty. 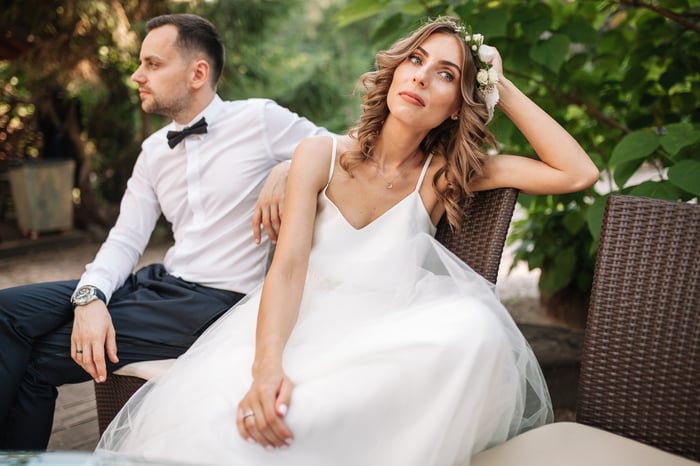 How the marriage tax penalty works

You become a victim of the marriage tax penalty when the taxes you pay as a couple exceed what you would have paid as a single filer. The marriage penalty often affects high-earning couples, subjecting those taxpayers to an increased tax rate. To get a better understanding of how combining income with your spouse can impact your taxes, take a look at the 2020 and 2021 federal tax brackets and rates.

For 2020, you'll notice that the highest-income earners pay a 37% tax rate if income is over $622,050 (married filing jointly) and single filers will pay that rate when income exceeds $518,400. As an example, consider a couple where one spouse has an income of $162,000 and the other spouse has an income of $500,000. If they were single, the lower earner would have a top marginal tax rate of 24%, while the higher earner would pay a top rate of 35%. However, if they marry, then their combined income would push into the 37% marginal tax bracket.

Married couples can enjoy double standard deduction amounts that lower their taxable income, but itemized deductions are the same regardless of filing status. Specifically, limits on certain itemized deductions don't double. You're still limited to $10,000 on state and local tax deductions and the interest on up to $750,000 on first loan on mortgage interest deduction.

If your income reaches a certain level ($200,000 for single filers and $250,000 for married joint filers), you may have to pay an additional 0.9% Medicare tax. If you didn't have to worry about this additional tax before, your marital status may swiftly boost you into this category if your spouse is a high earner.

Unfortunately, Social Security benefits aren't exempt from the marriage tax penalty. While a single filer won't start paying taxes on Social Security until they earn $25,000, married couples have to pay the tax at $32,000.

No need to guess what your taxes will be when you get married. You can get an estimate of your taxes in advance by using the marriage calculator available on the Tax Policy Center website. You'll be able to input total income, the number of children you claim, and other details for you and your spouse.

Even if the marriage penalty applies to you, don't throw away your marriage goals for the sake of lower taxes. It's a perfect time to work with your spouse to implement new tax strategies that will make marriage a bonus in all areas of your life.