The IRS audits less than 1% of tax returns, so your chances of having yours further examined are pretty low to begin with. But if you want to further minimize your chances of getting audited, here are a few essential moves to make.

The IRS is entitled to a share of all of your income (though there are a few exceptions, like municipal bond interest or Roth retirement plan withdrawals). But if you fail to report income, it could lead the agency to dig deeply into your return. In addition to your W-2, be prepared to provide details on all other income you earned during the year. This includes:

Specifically, pay attention to the 1099 forms you receive documenting income outside of your main paycheck. For each copy you get, the IRS receives one as well, and if your records don't match, you're more likely to get audited. 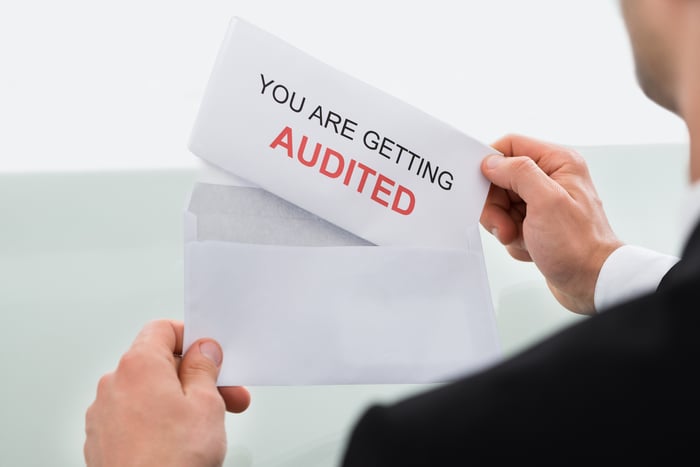 Guessing at tax deductions is a good way to land on the IRS's audit list. On the other hand, if you keep solid records of your deductible expenses, you'll be better positioned to report on them accurately. Those expenses might include:

3. Don't claim deductions that are disproportionate to your income

There's nothing wrong with claiming tax deductions that are legitimate. But if you claim deductions that are unusually high given your income, the IRS might choose to investigate. Say you're self-employed and earned $100,000 last year, and you're claiming $15,000 in business expenses. That's pretty reasonable -- it's conceivable that you had to spend some money to earn that income. But if you're claiming $15,000 in expenses with an income of $30,000, that looks shadier.

Filing taxes electronically won't just allow the IRS to process your return more quickly (and potentially issue your refund faster, too). When you file electronically, you're less likely to make a mistake on your taxes, and a more accurate return is less likely to need further examination.

5. Don't wait until the last minute to do your taxes

This year's tax-filing deadline is April 15 (not to be confused with last year's, which was pushed back to July 15). That means you have plenty of time to round up your paperwork, tally up your expenses, and learn more about the tax credits and deductions you're entitled to. Don't procrastinate on your taxes, because if you do, and you're then forced to rush through the filing process, you may be more likely to make a mistake that lands your return on the audit list.

Tax audits aren't necessarily as scary as you'd think they are. Most of them are resolved by mail, and it's possible for an audit to work out in your favor -- meaning, you don't owe the IRS more money as a result, or, in some cases, you're due a larger refund following an audit. But if you're like most people, an audit is something you'd probably rather avoid. Keep these tips in mind so the IRS doesn't come knocking.