Saying no isn't easy. Here's how to pull it off.

You're sitting at your desk, hammering away, when your boss approaches and asks that you take the lead on an upcoming presentation -- due tomorrow. You were already feeling overworked and overwhelmed to begin with, so this latest request is nothing short of ridiculous. Yet you worry that declining will make you look bad, so you respond with the most enthusiastic "yes" you can muster up.

If this scenario is all too common in your world, you're not alone. Countless employees are frequently put in a position where they feel compelled to say yes to other people's demands. But while being agreeable might win you some points on the spot, you'll actually be doing yourself a major disservice in the long run by saying yes all of the time. For one thing, you'll risk a serious case of burnout, but worse yet, taking on too many tasks might cause you to fall short on your key responsibilities -- and that might hurt your performance on the whole. 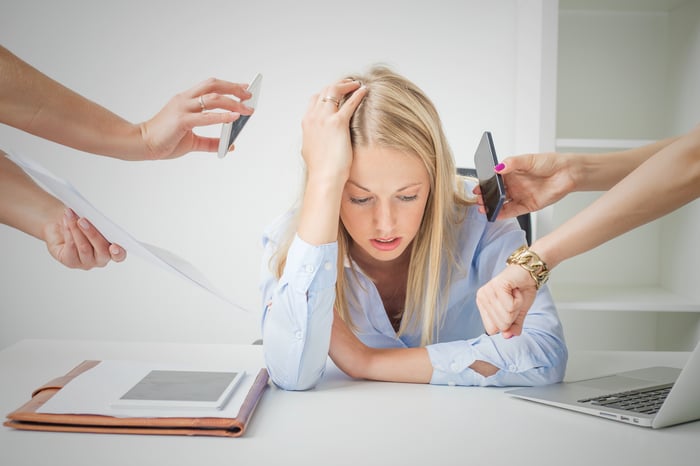 If you're the type who tends to have trouble saying no, here are a few ways to get over that hump. And the sooner you learn how, the better.

Saying no to a request at work isn't easy -- unless, of course, you have a reason that simply can't be argued with. The next time you're asked to do something, rather than hem and haw, or get flustered and start spitting out excuses, simply present the list of things you're currently working on, and explain that you'd be happy to take on a new task once you've tackled those items of greater priority. So rather than say something like, "Well, I would, but I have so much on my plate," say "I need to finish the quarter-end report before the week is up, but once that's done with, I'll carve out some time to comment on your proposal."

Of course, that assumes that it's a reasonable request to begin with. If you're asked to do something that just plain isn't your responsibility, and you have no interest in it becoming your responsibility, you'll need to make that clear. You might say something like "Reviewing the marketing team's raw data is not a good use of my time. I'm going to focus on perfecting my presentation, and I'll incorporate that additional data once it's made available to me."

2. Review the consequences of saying yes

The person you feel the urge to say no to may not realize just what he's actually asking of you. As such, it pays to help that person understand exactly why you're saying no.

Imagine you're asked to attend a business conference the week you have to conduct employee performance reviews. You might say: "Attending that conference won't leave me ample time to meet with my team members by the company-imposed deadline. And that's obviously a risk we can't take." If you show what that unexpected task would be taking away from, you won't have to expend as much energy justifying your response.

3. Offer up some options

Sometimes, we're forced to say no on the job because we simply don't have enough time or resources to get everything done within a certain deadline. If that's the case, and you're saying no because there aren't enough hours in your day to take on one more task, you can try putting the choice on your manager (or whoever's asking) instead.

Say your boss asks you to attend a meeting on his behalf without much notice. Rather than decline outright, you can say: "I was originally told to complete Project X by the end of the week, and I budgeted just enough time into my schedule to do so. Would you rather I attend that three-hour meeting tomorrow and push off Project X to the following day, or skip the meeting and stick to my original timeframe?" This way, you're passively saying no -- which makes for much less conflict.

There's a clear distinction between no and maybe, so if you mean the former, make sure your language clearly reflects that. Imagine you're asked to sit in on an ongoing focus group. If you respond to that request with, "I can only come if time allows" in the hopes that doing will make it go away, the person asking is apt to think that there's a chance you'll attend, and as such, might follow up. Persistently. On the other hand, if you respond more matter-of-factly with, "Sorry, I can't make it," you'll be sending a pretty direct message.

When it comes to job-related demands, saying yes is often easier than saying no. But if you say yes all of the time, those around you will be more inclined to take advantage. While you don't want to come off as unaccommodating, if you're reasonable about when you say no, and you're respectful in the way you do it, you'll be able to stand your ground without compromising those critical workplace relationships.