In his colorful memoir Career Warfare, former John Hancock Financial Company CEO David D'Alessandro offers advice to those who work in hierarchical organizations and seek to scale the corporate scaffolding.

In a recent article, I discussed one of the book's grounding insights: Your personal brand isn't built from the smashing successes you enjoy on "game day." Rather, it's built brick by brick from the innumerable small interactions you have with colleagues during ordinary working hours.

Published in 2003, D'Alessandro's book shows just a bit of age, as workplaces have become more casual and wired in the intervening years. Yet Career Warfare contains its share of evergreen insights, and in this article, we'll cover an illuminating take on work meetings.

D'Alessandro believes that you can, for the most part, classify all meetings into one of three types:

Let's briefly run through these meeting types to understand their benefits and hidden traps.

What's going on in the department?

Staff meetings are routine, are sometimes boring, and in the author's eyes, often fill the function of informing the team boss of what the staff already knows. Most of us have more to lose from this type of meeting than to gain.

Staff meetings, especially regimented ones with a recurring spot on the calendar, are meant to convey pertinent information, and not achieve much else. More importantly, insists D'Alessandro, they give the supervisor a warm sense that his or her team is functioning well, and the members play well together.

Thus, the staff meeting isn't the place to further your agenda, and it's never the place to settle scores. It's simply a venue to circulate the essentials for current projects. Attend, contribute, listen, and get back to work.

Let's play, but with a purpose

The "get something done" meeting typically involves brainstorming, ideation, or problem-solving. Alessandro says that right-brain people, the creatives, tend to dominate these types of meetings. 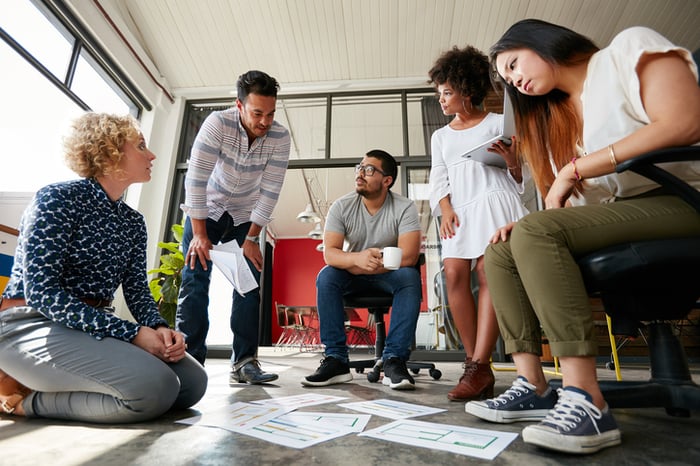 As your career progresses, you'll likely be on both sides of this meeting. As a participant, this is the place to make your mark, while showing you can cooperate with others. As the person in charge, you're empowered to get a tangible result out of numerous heads working together on valuable company time.

Your job is to be like Gertrude Stein, the American writer whose Paris home was a salon for artists like Hemingway and Picasso, and whose "chance remarks," according to the Encyclopaedia Britannica, "could make or destroy reputations." You have to be a bit of a despot to keep expectations high, but not so much that you end up destroying the free flow of ideas.

It's been fourteen years since Career Warfare was published, and we rarely turn to the Encyclopaedia Britannica anymore for quote references, but the advice is as vital today as it was when the book first hit the stands as a business best-seller. Personally, I've found that running "get something done" meetings with consistent results is one of the most intricate management tasks around.

Put on your flak jacket

The final type of meeting is the combat meeting. This is where you are arguing for money to achieve a goal. D'Alessandro urges us to prepare for these meetings and take them seriously, and to recognize victory quickly when we win:

I've been in a zillion meetings where the boss understood what someone was arguing for right away and said, "You know what, you're right. You don't need to tell me anymore. I agree with you. You have $4 million to develop this project."

But instead of saying a gracious, "Thank you," some people will go on arguing, either because they haven't finished using all the points they have prepared, or because they decide to bludgeon everybody with their intelligence.

People who do this wind up boring their bosses and tempting them to change their minds.

D'Alessandro also extols the value to your brand of graciously accepting defeat when you lose an argument for funds. 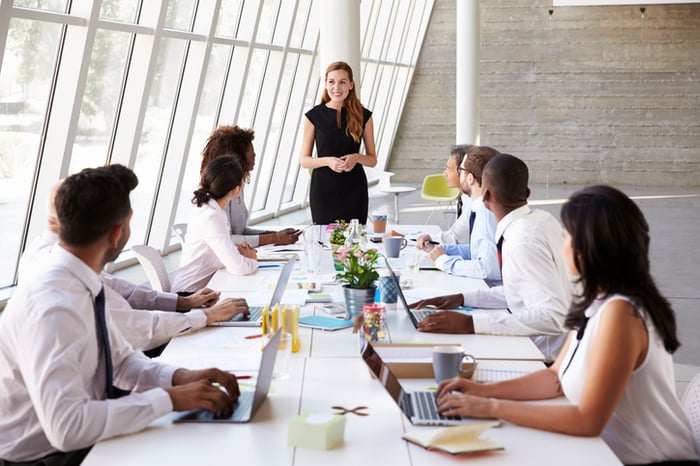 Sure, she's smiling pleasantly. But make no mistake, this presentation indicates that it's a combat meeting. Image source: Getty Images.

From my own experience in a career in which I've alternately been a low-level staff member, a manager, a CFO, and an entrepreneur, I think D'Alessandro is on to something here. Many of us are disinclined to think of work meetings in martial terms.

But very often we find ourselves either arguing for -- or gently suggesting that we need -- resources to achieve a work objective. Some of these objectives are tiny, and some are massive, as in D'Alessandro's example.

If an upcoming meeting will decide whether you get resources for a valued objective: Be prepared to lobby, cajole, and yes, if the stakes are high enough, fight for what you need. If you lose, you've at least treated the meeting with its due importance. And if you win, you can savor your victory before preparing for the upcoming Monday morning staff meeting.