Though age and experience don't necessarily go hand in hand, it's often the case that folks who work their way to the top are older, seasoned employees. At the same time, these days, it's not uncommon for younger employees to rapidly rise to the top of the chain -- especially in start-up environments, where 20-somethings are likely to get in on the ground floor. Throw in the fact that millennials are expected to make up 35% of the global workforce by 2020, and there's a good chance you might wind up in the position of working for a boss who's considerably younger than you are.

Of course, answering to a manager who's 20 years your junior is easier said than done. It's natural to harbor feelings of resentment to see someone much younger get promoted before you do, and it can also, frankly, be a bit uncomfortable. Still, it's imperative that you make the best of the situation, for your own sake as well as that of your career. Here's how to cope with a much younger boss, and help things run smoothly for both of you. 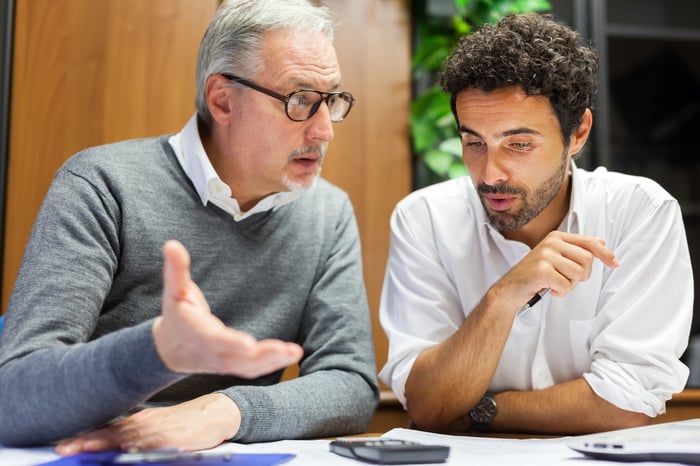 You may be inclined to discredit much of what your boss says due to their perceived lack of experience. After all, how much could they know after only a few years in the industry? But rather than take that attitude, remember that there's a reason your boss has achieved their rank in the first place. Though they may not have the same number of years of experience as you, they probably possess other knowledge that gives them an edge and makes them good at what they do -- so don't knock your boss until you give that person a chance.

The key to getting along with a much younger boss is not letting that age gap influence your behavior. You may need to practice swallowing your pride, but you should go out of your way to treat that boss with the same respect you'd show someone older. Keep in mind, too, that your boss might feel somewhat intimidated by the fact that they're younger than their direct reports, which might put them on the defensive from the start. If you're sensitive to this and go out of your way to show your boss that you're ready and willing to let them call the shots, you're more likely to get along.

3. Make it a learning experience

Younger workers typically bring a different attitude and skill set to the table than older workers. Rather than bemoan the fact that you're stuck working for someone younger, make a point of learning from them and their peers. You might enjoy some insights that can help you build your career, even if you've already been at it for quite some time.

The more time you spend in a given industry or at a specific company, the more intel you're likely to gather. If your boss doesn't have time on their side, they'll no doubt come to appreciate you sharing that knowledge with them. If you let your boss know that you're eager to serve as a resource, it'll send the message that you're on the same team.

Though having a boss who's much younger may not be ideal, the sooner you adjust to that arrangement, the better your relationship is likely to fare. And who knows? If you really make a point of supporting your boss, they might end up being the person who advocates on your behalf and gets you the promotion you've been waiting for.