You've graduated college and are ready to take the workforce by storm. There's just one problem: Since you don't have much real-world experience, you're struggling to get hired. But since you do have people skills and are computer-savvy, there is one job you'd be perfect for: administrative assistant.

Now when some people hear the words "admin assistant," they conjure up images of overly qualified, indebted degree holders who spend their days fetching coffee while bemoaning the money they spent on their education. But in reality, administrative assistants do more than just make photocopies and reserve conference rooms. And while it's not the most booming field out there, it is expected to grow. By 2024, in fact, employment for admin assistants will increase by 3%, according to the U.S. Bureau of Labor Statistics. 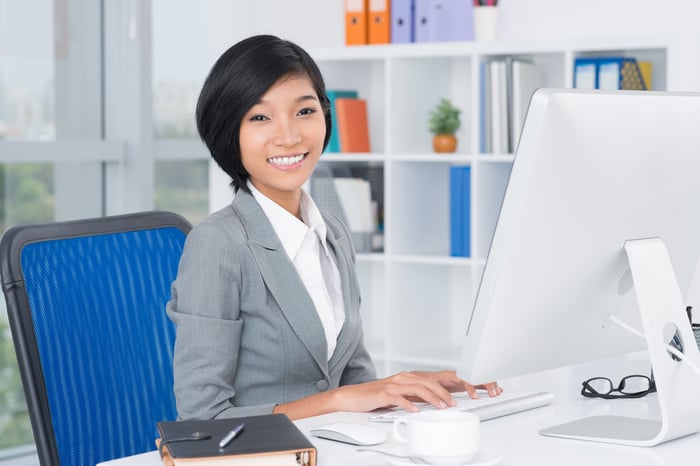 If you're new to the job market and are struggling to find your footing, it pays to consider accepting an admin assistant role, even if just for a year or two. Here are a few good reasons why.

1. You'll get to dabble in a wide range of tasks

Most administrative assistants these days do more than answer the phone and take messages. In addition to planning events, managing budgets, and tracking data, some are even tasked with overseeing projects for the people they work for. And if you wind up reporting to a high-level executive and have the right skills, you might quickly be granted a respectable amount of responsibility that will not only keep you engaged while on the job but make you a more qualified candidate going forward.

2. You can get your foot in the door at your dream company

Perhaps you're hoping to work as a rock-star copywriter at the largest ad agency in town. The problem? You're fresh out of college with minimal experience, and there's no way that agency will so much as glance at your resume based on your current qualifications.

On the other hand, if you land a job as an admin assistant at that same agency, you'll have an opportunity to dazzle some of the higher-ups with your organizational skills and creativity. And from there, you can have the conversation about climbing the ranks, or at least assisting on some bigger projects to boost your skills and build your portfolio.

When some people think of taking an administrative assistant role, they automatically resign themselves to a lowly salary that's barely enough to pay the bills. But you can actually do quite well for yourself as an admin assistant. Administrative assistants earn an average of $24,474 to $49,224 a year, according to PayScale, and while the lower end of that range isn't much to write home about, if you work for a large company and score the higher end, that's not a bad starting wage to collect.

Clearly, there are worse things than starting your career in an admin role. But keep the following in mind: While there's certainly a decent amount of demand for administrative assistants these days, don't make the mistake of going into the interview process with the attitude that your prospective employer will be lucky to have you, and that the job itself is beneath you. That's the sort of sentiment that can sneak through and hurt your chances of getting hired.

Rather, embrace the idea of taking an admin role, get excited about it, and approach that interview the same way you would for another job. This especially holds true if you're applying at a larger company, and the salary at stake is particularly competitive. You never know what opportunities might arise once you spend some time in the right admin position, so it pays to go in with an open mind.