Please ensure Javascript is enabled for purposes of website accessibility
Log In Help Join The Motley Fool
Free Article Join Over 1 Million Premium Members And Get More In-Depth Stock Guidance and Research
By Maurie Backman - Oct 25, 2017 at 10:03AM

From get-well gifts to birthday lunches, it's hard when you're constantly hit up for cash. Here's how to cope.

The purpose of going to work is to earn a paycheck, so it's kind of ironic that in going to work, you're apt to encounter a number of expenses that cost you money, from commuting costs to maintaining a professional wardrobe. But while it's one thing to write off fuel and clothing as the cost of holding down a job, it's another to constantly find yourself subjected to money requests at the office. Yet a large number of employees encounter such uncomfortable situations every day.

Whether it's to chip in for Nancy's baby shower gift, Bob's surprise birthday cake, or Susan's retirement gift, it might seem like no matter where you turn, there's a coworker in your face asking for cash. And as much as you'd like to support your teammate's kid's basketball team or your colleague's wife's fundraiser, you're also working with a limited amount of money yourself. 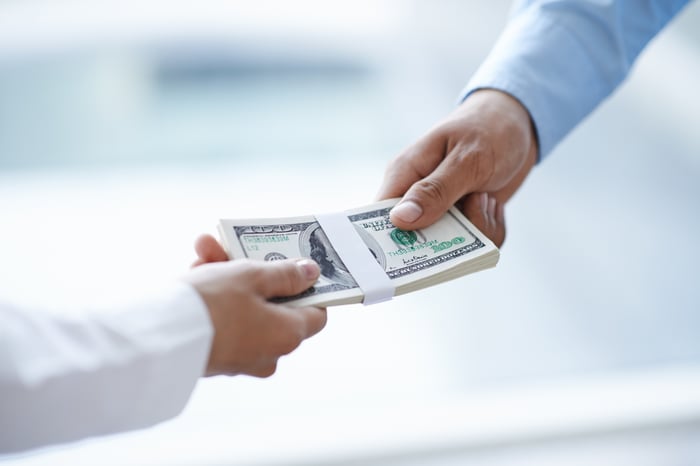 That's why you may need to adopt a more strategic approach to these scenarios. If you don't, you could wind up in a situation where the mere act of showing up to your office is actually wrecking your budget.

If you work for a large company, your chances of being asked for money are higher than for someone employed in a smaller office. You may therefore need to be more selective about which items or events you contribute to. Specifically, if you're spending too much at the office, decide that going forward, you're only giving to the people you work closely or have the best relationships with. You're better off contributing $10 toward a get-well gift for the colleague who sits over at the next desk than helping to fund a gift for someone you've interacted with twice.

Similarly, decide that you're only supporting causes that mean the most to you. If it means that one colleague's daughter's dance troupe gets the shaft because you're funding another coworker's child's diabetes fundraiser, so be it.

There are some money-related situations at the office you really can't get out of. For example, if your coworkers are collecting money for a year-end gift for your boss or everyone is pooling funds for a thank-you gift for the CEO, then you're going to look cheap and petty if you wind up being the one person who doesn't pitch in. But while you can't easily say no to such requests, you can give the minimum amount that's acceptable and leave the generosity to others.

3. Offer your services in lieu of cash

Just because you don't contribute to a particular effort doesn't mean you can't support it in other ways. If money is an issue and you don't have much or any to hand out, offer to help facilitate whatever it is that money is supposed to achieve. For example, if people are collecting money to send food to a coworker who's recovering from surgery, you might offer to cook and deliver a dish (assuming you can do so at an out-of-pocket cost that's lower than what you're being asked to spend).

It's hard to say no when you're pressured for money, but it can be even stickier in an office environment, where you'll be forced to look those money requesters in the eye every single day. Still, if you've really reached your limit for the month and can no longer pony up when your coworkers ask, state your position politely but firmly. You can decline with regrets, though you don't have to. A simple "I'm unable to contribute this time" should get the message across, and it's OK if you feel the need to preface that with an "I'm sorry." With any luck, your colleagues will understand and won't push.

Being asked for money at work can make for an uncomfortable situation, regardless of where you stand financially. The better prepared you are to handle those encounters, the easier it'll be to preserve some of your hard-earned cash.