Please ensure Javascript is enabled for purposes of website accessibility
Log In Help Join The Motley Fool
Free Article Join Over 1 Million Premium Members And Get More In-Depth Stock Guidance and Research
By Maurie Backman - Jan 22, 2018 at 6:18AM

Are you pushing yourself to an unhealthy extreme? Here's how to tell.

We're often told growing up that there's no such thing as working too hard or doing too good a job. But as adults, there comes a point when we need to convince ourselves that enough is enough. Noble as it is to want to excel at your career, if you push yourself too hard, you could end up hurting your health and sanity in the process. Here are just a few warning signs that you're overdoing it on the job front.

1. You're feeling burned out

Maybe you've reached a point where the tasks you once found exciting are now completely mundane. Worse yet, you might be in a place where you actually dread doing the things you never minded doing before. If any of this sounds like you, then it could be that you're suffering from a full-blown case of burnout. 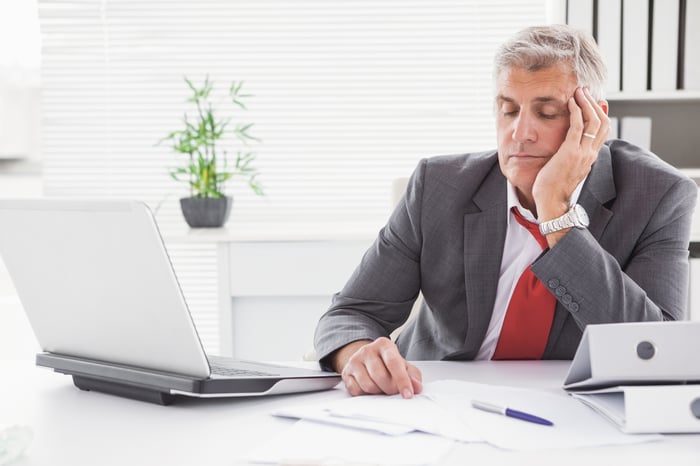 Though it might seem like a convenient buzzword to throw around, burnout is actually no joke. In fact, it has a clinical definition: "a state of physical, emotional, or mental exhaustion, combined with doubts about your competence and the value of your work."

If you're deep in the throes of burnout, then it's time to talk to your manager about taking certain responsibilities off your plate. Tapping other resources might give you the breathing room you need to feel less stressed and overwhelmed.

2. You're not getting enough sleep

Though some of us can get by on less sleep than others, most adults are advised to aim for anywhere between seven and nine hours per night. Yet nearly 75% of American workers don't get enough sleep on a regular basis, according to data from job site Glassdoor.

If you're one of them, and your job is to blame, then it's time to start making changes. Not only can poor sleep impact your performance, but it can also render you more susceptible to illness. If your hours are too demanding (say, you're expected to be on a midnight conference call twice a week yet show up to work at 9 a.m. the next morning), talk to your boss and negotiate a change. Explain that your current schedule just isn't sustainable, and with any luck, your manager might agree to ease the burden.

3. Your productivity seems to have plateaued

You'd think that putting in extra time on the job would make you more productive. But surprisingly, there comes a point when working too many hours won't do you any good. According to a Stanford University study, employee productivity declines significantly after 50 hours of work in the same week. Not only that, but it falls off a cliff completely after the 55-hour mark so that someone working, say, 60 hours a week gets no more done than someone working 55.

If you've recently come to find that you're not making strides productivity-wise despite burning the midnight oil, then it's time to start scaling back. Working fewer hours will help you approach your job from a more refreshed standpoint, and just as importantly, it will help you achieve that much-needed work-life balance.

It's one thing to strive to do your best on the job, but it's another thing to push yourself to an unhealthy extreme. If you've reached the latter, then it's time to reassess your priorities and come up with a better approach to your work. Your well-being depends on it.