Please ensure Javascript is enabled for purposes of website accessibility
Log In Help Join The Motley Fool
Free Article Join Over 1 Million Premium Members And Get More In-Depth Stock Guidance and Research
By Maurie Backman – Apr 9, 2018 at 11:33AM

Here's how to get on your manager's good side -- and help your career in the process.

Whether you're new to your job or have been at it for years, it never hurts to get in your manager's good graces. If you want your boss to really come to respect you as an employee, here are a few things you should start doing.

1. Own up to mistakes

We're all human, which means that from time to time, we're apt to make a mistake on the job, whether it's a major mistake or a minor one. But the last thing you want to do when that inevitably happens is make excuses for your blunder or attempt to shift the blame to somebody else. Rather, take ownership of the errors you make, apologize for them, and take steps to ensure that they aren't repeated in the future. For example, if you botched a major project by rushing through its data and transposing figures, tell your boss that you'll build in more time for proofreading during your next go-round. 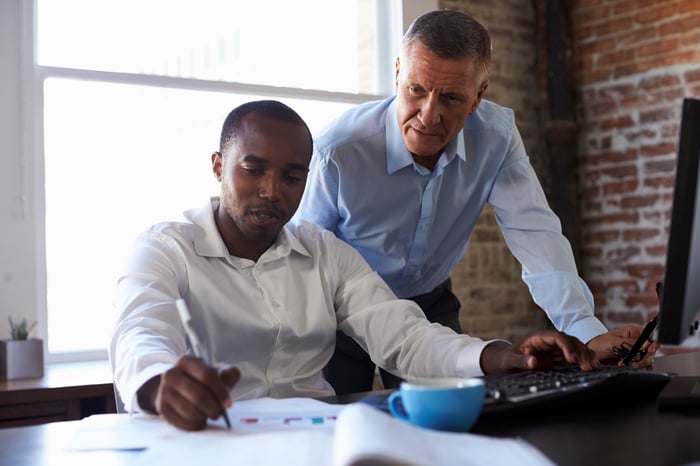 2. Present solutions rather than problems

Maybe you're up against a deadline and are missing key data from other teams within the company. Or perhaps your internal software keeps crashing, thus preventing you from doing your job. Your first inclination might be to approach your boss and complain about these issues, but rather than do that, try presenting them in the context of solutions.

In the first scenario, for instance, you might say something like this: "It's taking Bob's team longer than expected to deliver its data, and I'm concerned about our pending deadline. I propose using the data from Mike's team instead, as we already have access to it." In the second scenario, you might try this: "A contact of mine at another company uses a software that's proven quite reliable. I'm happy to price it out and see if it's a viable solution here, as it might help us avoid some of the inconsistencies we've been experiencing." In both situations, you're not just whining; instead, you're proactively looking to solve problems.

3. Have a positive attitude

Most of us get stressed at the office from time to time, but if you're able to be that person who maintains a positive outlook in the face of challenges, your boss will no doubt come to appreciate your attitude. The next time your team gets stuck on a tough project no one wants, map out a plan to tackle it while the rest of your colleagues sit there moaning. That's something your boss is apt to take note of.

Many of us work in fast-paced environments where things change constantly. If you prove that you're able to roll with the punches and not get flustered, your boss will likely come to regard you more highly. So the next time a process change is announced or shifts happen within the organization, don't let it throw you. Rather, keep your cool, and make it clear to your manager that you're not the least bit rattled.

It's one thing to have a boss who never seems to have good things to say about you or your work. But if your manager takes the time to offer up some constructive criticism, responding professionally is a good way to earn a little extra respect. First, stay quiet while that feedback is delivered so that your manager doesn't feel interrupted. Next, avoid getting defensive. Instead, thank your boss for taking the time to share those thoughts, and pledge to take them to heart. Then, follow up by taking steps to show your manager how you're incorporating that feedback into your workflow. This sends the message that you're not only open to criticism but are also humble enough to acknowledge your shortcomings and recognize that there may be a better way to get things done.

The more your boss comes to respect you, the greater your chances are of landing a promotion and getting ahead at your present job. Follow these tips, and with any luck, your standing at work will only improve over time.