Please ensure Javascript is enabled for purposes of website accessibility
Log In Help Join The Motley Fool
Free Article Join Over 1 Million Premium Members And Get More In-Depth Stock Guidance and Research
By Maurie Backman – Apr 13, 2018 at 10:33AM

Is your employer being overly stingy with your paycheck? Here's why you need to speak up about it.

In an ideal world, we'd all make the salaries we deserve at our jobs. But things don't always shake out that way. Sometimes, we're forced to accept positions where the salaries are lower than what we'd like. In other scenarios, we might think we're getting a fair wage, only to realize after the fact that the opposite holds true.

Either way, if you're convinced you're being underpaid at work, you shouldn't remain silent about it. That's because getting less money than you're worth will hurt you in more ways than one.

It's not uncommon for interviewers to ask candidates how much they earned at their previous jobs -- though some states are taking steps to make this question illegal. If you're being underpaid at present and your salary at your next role is determined based on your current earnings level, you're basically setting yourself on a course to be paid less than what you're worth for the rest of your career. And that could impact not just your day-to-day quality of life, but your retirement savings and other such long-term goals. 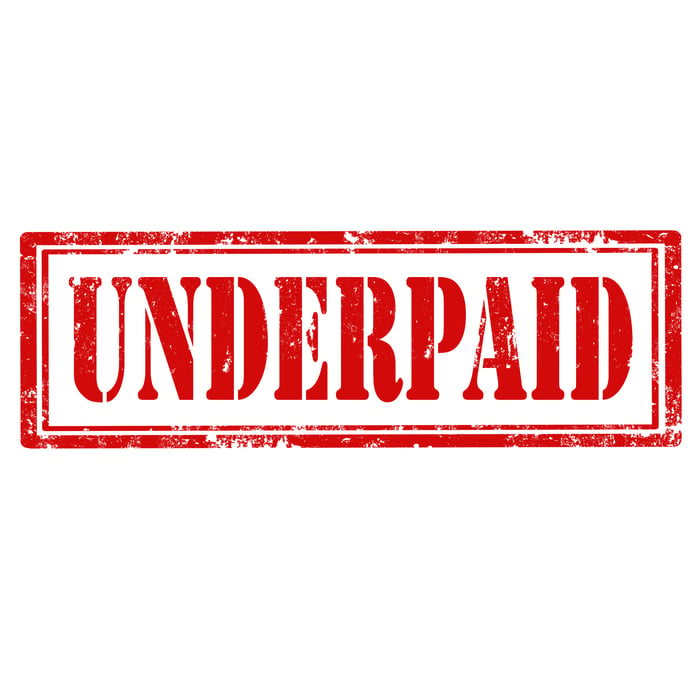 2. You'll feel worse about yourself

Money and self-worth often go hand-in-hand. If you're not being paid fairly at work, it could easily result in negative feelings that manifest in a number of ways. Studies have shown that being underpaid doubles your likelihood of falling victim to stress, depression, and other emotional problems. And feeling underpaid also raises your risk of having poor health, in general.

3. You'll be less motivated to perform your best

It's hard to push yourself to do your best when you're bitter about your inadequate salary. In a recent Accenture study, being underpaid was the top reason for worker dissatisfaction. But if your performance falters as a result of those bad feelings, you could end up stunting your career growth and even putting your job on the line. And let's face it: That puts you at a greater risk of encountering even more money-related woes.

If you're convinced you're being underpaid at work, you must ask for a raise, even if it's an uncomfortable conversation to have. But don't go into it blindly. Rather, do your research beforehand to ensure that you are, indeed, earning less money than your local peers.

Job site Glassdoor has a helpful "Know Your Worth" tool that allows you to review salary data by title and geographic location for a true apples-to-apples comparison. If you plug in some details and find that your salary is lower than the average in your area, that makes a pretty compelling case.

But you'll need more than just industry data to prove that you should be earning a higher salary, so before that meeting, compile a list of qualities and achievements that show how valuable an employee you really are. For example, if you're a sales manager whose team consistently outperforms others, use that point to your advantage. If you're the one in-house copywriter who's constantly being asked to jump on high-profile projects, that's a nod in your favor, as well. Show your manager that you deserve that higher salary, and you're more likely to get it.

At a basic level, being underpaid can make you feel lousy. But more than that, it can impact your career on a long-term basis. So don't stay quiet if your paycheck isn't up to par. Make the case for a raise, and if your company denies that request, dust off your resume and start looking elsewhere. Though money isn't everything when it comes to your job, there's no need to settle for less when you're capable of earning more.