Please ensure Javascript is enabled for purposes of website accessibility
Log In Help Join The Motley Fool
Free Article Join Over 1 Million Premium Members And Get More In-Depth Stock Guidance and Research
By Maurie Backman – Apr 16, 2018 at 7:26AM

Taking time off to raise kids? Here's how it might (unfortunately) hurt your career.

Even if you're extremely dedicated to your career, there might come a point when you find yourself out of work for a number of months, or even years. Maybe you'll get burned out and need a break. Maybe you'll decide to tap your savings and do the traveling you never did when you were younger. Or maybe you'll get laid off and therefore have no choice but to face a brief career hiatus as you look for new work.

No matter the circumstances, the end result is the same: If you're out of work for a substantial period of time, you're going to wind up with a gap on your resume. And that's something prospective employers are apt to notice. 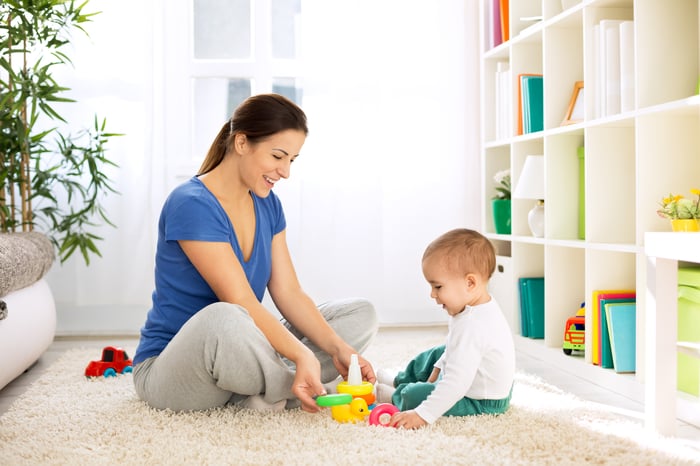 But new data tells us that not all resume gaps are created equal. Apparently, there's a difference between having a gap due to regular old unemployment versus having that gap stem from actively taking time off to raise a child. And unfortunately, if the latter scenario applies to you, you may have a harder time than expected landing a job once you're ready for one.

Will you be penalized for staying home to raise a child?

Given the number of parents these days who decide to take time out of the workforce to raise kids, you'd think there wouldn't be a stigma attached. But in a recent study of over 3,300 resumes, stay-at-home parents were only half as likely to get responses from potential employers as applicants who were simply unemployed.

Now the good news, if we even want to call it that, is that employers didn't seem to discriminate between stay-at-home moms versus stay-at-home dads. In other words, both male and female parents who took time off to raise kids had the same, albeit lower, chance of getting a positive response to a resume. Still, this data certainly paints a discouraging picture for parents who make the choice to leave the workforce temporarily.

Of course, not all parents who go this route do so out of a desire to be there for every milestone their young children achieve. For many, it's a financial decision. Given the cost of child care today, for some parents, going back to work means losing money once you factor in that expense, especially when coupled with a pricey commute. Still, it's a shame that some stay-at-home parents might face their share of unique challenges when attempting to enter the workforce once their kids are older.

If you decide to take time off from your career to raise children, there are steps you can take to appeal to employers nonetheless. First, attempt to do some sort of part-time work during that period, even if it's only a few hours a month. You might choose to start your own crafts business or consult in your field as time allows. Either way, if you manage to maintain some sort of side gig, you'll have something to put on your resume instead of having that glaring gap.

If that's not feasible, then try to use your time out of the workforce to boost your job skills so that when you are ready to return, you're qualified for plenty of positions. You might, for example, take a few online courses in the midst of parenting, or you could pursue a certification in your current field.

You can also help yourself by staying current on changes to your industry during your time away. If you're an accountant, for example, who's taking time off this year, read up on the latest tax changes so you're equipped to dive back in.

Finally, keep up with your business contacts during your career break, whether via the occasional email or monthly lunches in person. This not only sends the message that you're interested in maintaining your career but also puts your name on people's radar when openings pop up later on.

In an ideal world, parents wouldn't be penalized for taking time off to raise children. Neither would other folks with resume gaps, for that matter. But if you've made the decision to take a break from your career to stay home with your kids, be strategic during that time to avoid struggling when you are eventually ready to pick up where you left off.