Please ensure Javascript is enabled for purposes of website accessibility
Log In Help Join The Motley Fool
Free Article Join Over 1 Million Premium Members And Get More In-Depth Stock Guidance and Research
By Maurie Backman – Apr 23, 2018 at 6:36AM

Here's an even bigger reason to resent being trapped in those conference rooms.

Like it or not, meetings are a part of life in most corporate (and even non-corporate) environments. It's estimated that middle managers spend about 35% of their time in meetings, and for upper management, that figure soars to 50%. Ouch.

To make matters worse, all of that meeting time is costing companies money, especially when we account for the fact that participants often aren't as engaged as they should be during those mandatory discussions. A good 91% of employees say they daydream during meetings, while 73% regularly do other work. All told, job site Glassdoor reports that businesses are losing $37 billion each year by having workers attend meetings needlessly. 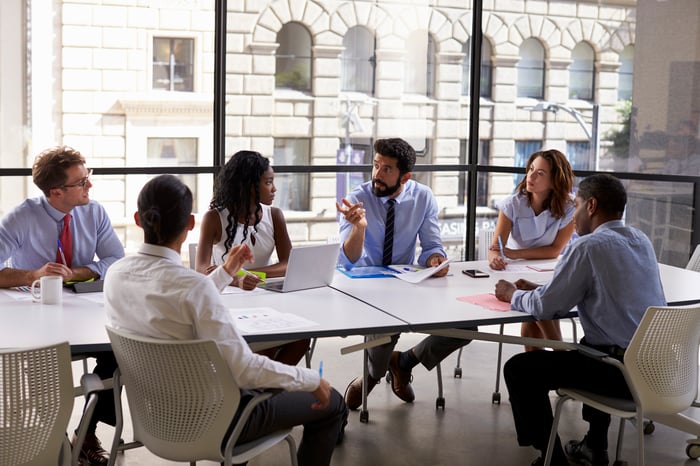 If that number sounds outrageous to you and you're in a position to do something about it, then it's time to rethink your approach to meetings. Here are a few points to start with.

It's common for meetings to last for an hour or longer, but why? Often, it's to allow everyone enough time to speak and build in room for in-depth discussions. But rather than uphold that practice, try compressing your meetings into shorter periods and seeing if you can get the same amount accomplished in less time. A formerly 60-minute meeting that's condensed to 30 minutes might encourage people not to chime in unless they absolutely need to.

Think about the last time you were invited to a meeting that started at noon and ended an hour later. Were you attentive and focused or busy shifting in your seat to cover up the sounds of your grumbling stomach? One mistake meeting organizers regularly make is scheduling those gatherings at the worst possible times during the day -- think first thing in the morning, when workers have yet to have their caffeine fix kick in, lunchtime, when hunger trumps all, and late in the day, when most of us are too bleary-eyed and drained to be of much use. A better bet? Find the most innocuous times to hold meetings and schedule them then. If anything, your participants will appreciate the courtesy.

When you go to the supermarket without a grocery list, you typically wind up spending more time roaming the aisles trying to figure out what you need. The same holds true for meetings -- if you don't go in prepared, you're less likely to be productive. That's why it's crucial to have an agenda, so you can structure your meeting accordingly and help participants stay on point. Better yet, send out copies of that agenda to meeting participants ahead of time so they can prepare on their end.

4. Be selective with participants

Remember that old saying "the more, the merrier?" It doesn't apply to meetings. The more people you put in a room, the more opinions you'll be privy to, which might end up slowing things down, especially when you factor in tangential questions, side conversations, and the constant click of people typing emails on the sly or checking their phones for messages. Rather than err on the side of overinviting, keep your meeting-participant lists to a minimum, and see what that does.

Most businesses can't afford to throw away money. Be smarter about how you run meetings, and with any luck, you'll not only save your company some cash, but actually accomplish the things you set out to do in the first place.