There's nothing wrong with playing up your skills on a resume to present yourself in the best possible light. But there's a difference between slightly embellishing and downright lying. Countless Americans, though, are guilty of the latter, especially among the under-40 set. In fact, 26% of workers in that age range admit to lying on a resume, according to data from Udemy. Workers over 40 aren't off the hook, though -- 7% of those 40 and above have gone the same route.

If you're thinking of lying on your resume to make up for the fact that it's otherwise not all that impressive, you should know that doing so could end up costing you the jobs you apply for and damaging your reputation in the process. Here's a better approach to making yourself more appealing to prospective employers. 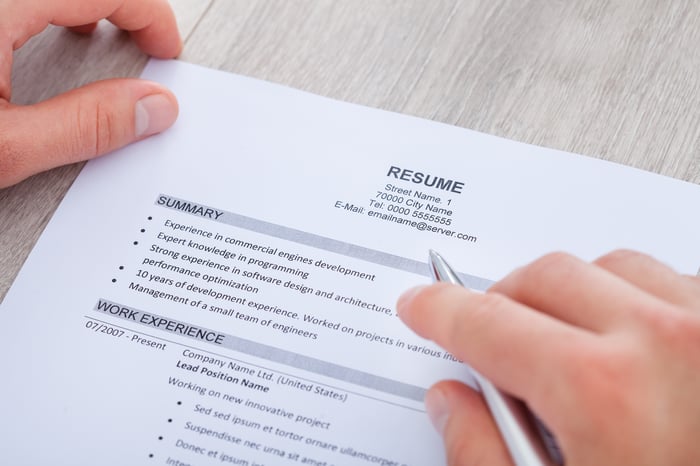 1. Be smart about highlighting your most impressive skills

Maybe you're not coming in with the most eye-catching job title. But if you have the same skills as someone at, say, the director level, talk them up. Use data and statistics to show that you're equally capable of getting the job done, and that you have a proven track record of success. It's a better bet than putting down a job title you never actually held.

2. Load up on action verbs

Your resume should tell employers about the many things you've done in your career, so the more action items you include, the more attractive a candidate you'll be. So talk up the various tasks you've tackled in previous roles, and focus on language such as "managed," "created," and "implemented." Words like that will help the person reading your resume picture you doing those tasks, thus helping to make your case.

3. Tailor your resume to the jobs you're applying for

Maybe you didn't spend the bulk of your time at your last job meeting with clients and presenting marketing pitches, but if you did that some of the time, and the role you're applying to now hinges on your ability to present and sell, then that's something you want to focus on. Tailoring a resume to a specific job by focusing on certain aspects of your career isn't lying provided you did the things you claim you did, and there's nothing wrong with not including certain former responsibilities that aren't relevant to the job at hand. Emphasizing the things prospective employers want to see is a good way to get their attention.

Your resume is only supposed to serve as a snapshot of your work history. If you have gaps you think will prevent you from getting the job you want, rather than fib your way through your resume, use your cover letter to sell yourself as a candidate. Talk about your strengths, prove that your experience matches the requirements for the role in question, and use language that lets your personality shine through. With any luck, that'll be just the thing to entice employers and get your foot in the door.

Natural as it may be to want to lie on a resume, it's a mistake that could end up costing you. Remember, if you're hired, but your employer then comes to discover you weren't truthful during the interview process, you could easily find yourself out of a job. And if that happens, you can forget about getting a reference for your next go-round. You're much better off being honest about the things you did and didn't do and the titles you did and didn't hold -- even if that means losing out on one or two opportunities along the way.