Please ensure Javascript is enabled for purposes of website accessibility
Log In Help Join The Motley Fool
Free Article Join Over 1 Million Premium Members And Get More In-Depth Stock Guidance and Research
By Maurie Backman – Apr 27, 2018 at 7:22AM

Sometimes, the writing really is on the wall.

In the course of any job, it's natural to get a little paranoid once in a while. Maybe you weren't included in an email you should've been on; or maybe a project was discussed on the fly, and you were left out as a result. But there comes a point when paranoia gives way to reality, especially if it's your boss who's causing you to raise an eye. Here are a few indications your boss might be trying to push you out -- and what to do about it.

1. You're excluded from meetings

Most of us only have so much patience for meetings, so if your boss stops inviting you to key sit-downs, you might initially be happy to have that time back in your schedule. But being excluded from meetings is a key sign that your boss doesn't intend for you to stick around. This especially holds true if your manager stops inviting you to participate but also doesn't offer an explanation as to why. 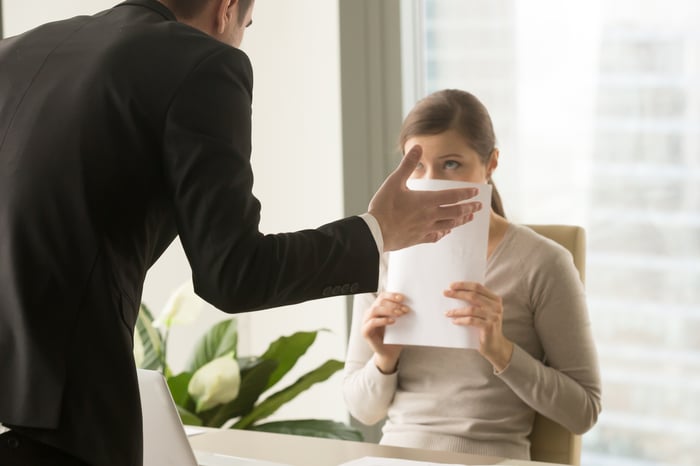 2. You're losing responsibilities, not gaining them

A healthy career progression is usually one in which you gain responsibilities along the way. So if your boss starts taking certain tasks off your plate instead, and doesn't replace them with others, it could mean that your manager is secretly (or not so secretly) planning your departure.

3. You're not formally introduced to new hires -- when everyone else on your team is

Not every company has a formal introduction process when new folks are brought on board. But if you find that your colleagues have all been introduced to a string of recent hires, and you were never included, it could be because your boss wants you out.

4. Your boss won't talk to you in person

Managers tend to be busy people, so it's not unusual for them to communicate with their direct reports via email. But if your boss never seems to have the time to talk to you in person, or declines your requests for one-on-one sit-downs, that inability to look you in the eye could spell trouble.

5. You're criticized frequently in public

It's your manager's job to offer feedback on your performance. But there's a right way and a wrong way to provide criticism, and a public forum falls under the latter category. If your boss consistently calls you out in front of your peers, it could be a sign that your manager is trying to embarrass you in the hopes of having you up and quit.

How to cope when your manager wants you out

Once it becomes obvious that your boss blatantly wants you gone, you'll have to decide whether you want to stay on board or take your career elsewhere. Assuming the former, your first move should be to document all instances of your manager's behavior. Not inviting you to meetings and shifting responsibilities aren't necessarily egregious offenses on your boss's behalf, but if your manager refuses to give you the time of day, bashes your performance in public, and makes a point to treat you differently than the other people on your team, that's something you can take to your human resources department.

Before you run to HR, though, it's worth pushing your manager for a conversation to try to sort things out. Maybe you said or did something to rub your boss the wrong way that you need to apologize for. Or maybe your performance just hasn't been all that great, and your boss wants you out for what are actually some pretty valid reasons. If you're able to get to the bottom of things and pledge to improve, your boss might soften up and give you another chance.

If that tactic fails, though, meet with HR, present the data you've collected, and discuss your options. Affirm your commitment to the company and ask to be transferred to another team. If that's not possible, and you must keep working with your manager, insist that HR intervene. Otherwise, your boss will likely continue to make your life miserable.

Finally, accept the fact that despite your best efforts to keep your job, your boss might end up emerging victorious and ousting you nonetheless. It's an unfortunate situation to be in, but you can prepare for the worst by updating your resume in advance and doing a little pre-emptive networking to see what's out there. You may come to find that there's a better position for you at another company, one that comes with a manager who doesn't seem to have it in for you.