Please ensure Javascript is enabled for purposes of website accessibility
Log In Help Join The Motley Fool
Free Article Join Over 1 Million Premium Members And Get More In-Depth Stock Guidance and Research
By Daniel B. Kline, Selena Maranjian, and Maurie Backman - Updated May 1, 2018 at 2:48PM

Don't be so distracted by the positives that you miss a warning.

When you get offered a new job, sometimes the excitement of the situation makes it easy to miss problems. You're so focused on landing the position that you ignore red flags waving right in your face.

That makes sense. Sometimes the prospect of change, or the work you might be doing, blinds you to what someone else might easily see. Just because it can happen does not mean it has to happen to you.

Make sure you give the company hiring you as much scrutiny as it gives you. Below are three red flags. They are by no means the only signs you should look for when you consider a job. They're common warnings, though, so keep your eyes open for them. 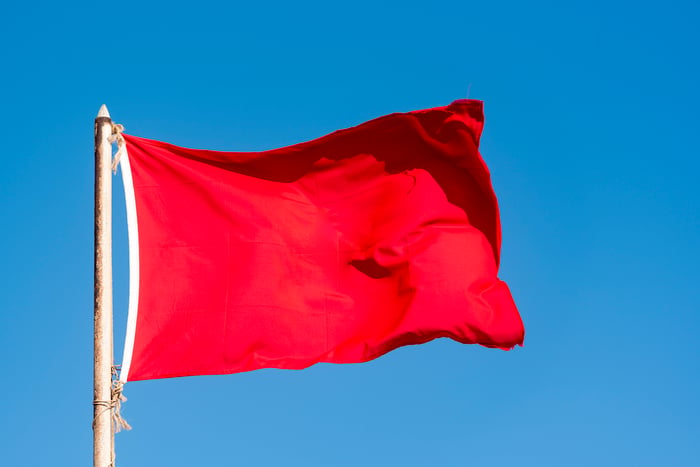 Watch for red flags and warning signs when you consider a job. Image source: Getty Images.

Maurie Backman: I was happily freelancing my way through life when a company I did a lot of work for asked if I was interested in joining the team on a permanent basis. Truthfully, I loved freelancing, but we had just bought a house that was proving to be more expensive than anticipated, and I figured the steady income wouldn't hurt.

Although the company knew my work, it insisted I go through a formal interview, and I didn't have a problem with that. But when I was called on a Tuesday to ask if I could come in on Wednesday, because they really wanted me to start on Thursday, I started to get a funny feeling about moving forward.

During the interview, you could tell that at least one or two people had never so much as looked at my resume before sitting down to chat. But once my official offer came in, I figured I should give the job a go. Again, a reliable paycheck would make my newly purchased home more manageable, and even though the interview process itself was disorganized, I figured things couldn't actually be that bad.

I was wrong, though. I wound up staying at that job for a couple of years, amid a sea of internal changes, and while I was happy in some regards, the one thing that frustrated me throughout my employment there was the glaring disorganization that seemed to filter into so many areas of the business. It's a good thing I wound up leaving when I did and going back to freelancing. Now, if things are disorganized, the only person I can blame is myself.

Selena Maranjian: The first job I took after I got my MBA degree was not the typical MBA position as a marketing manager or investment banker. It was a consumer research analyst job, in New York City.

As in many other entry-level or near-entry-level jobs in many industries, the salary was rather paltry. I was fascinated by the work, though, and eager to join the company, so after getting the job offer, I pushed for a higher salary. I figured that was reasonable: I had a freshly minted MBA, which was qualifying many of my classmates for six-figure incomes, and the job was in New York City, where the cost of living was notoriously high. I didn't get (or even ask for) a six-figure income, but I did get what was a generous salary for that job at that company.

Once in the job, though, I found that my pay -- relative to others -- was a problem. Some in the company resented it, which wasn't going to make it easy for me to move up and earn more. It felt uncomfortable. In retrospect, I might have been better off taking a job where the usual compensation for the position was sufficiently generous.

Daniel B. Kline: Early in my career I worked at a newspaper company that chewed through editors. Some daily papers went through a few editors a year due to low pay, long hours, and a generally terrible working environment.

At the time, I used that to my advantage. Because I was young, didn't have a child yet, and had a wife working long hours toward earning her Ph.D., I was willing to put up with anything. That landed me promotions that I would not otherwise have gotten at my age.

At the time, this situation seemed like a positive. As I got older, I realized that high turnover was not an opportunity, but a sign of bad upper management. If a company loses workers quickly across multiple departments, that suggests people don't want to work there. It's probably a mistake to think your experience will be any different.