I'd seen it coming for a long time. But one day, I finally had enough.

It was my birthday. I'd come into the office earlier than usual to get a jump start on my workload so that I would be able to sneak out on time to meet a group of people for a celebratory dinner.

No one at the office knew it was my birthday, and that was perfectly fine. See, I didn't exactly have the best relationship with my boss or colleagues. I worked for a small hedge fund where the atmosphere was perpetually tense and intense. Nobody really seemed to like one another, and because my goal was to earn a paycheck rather than make friends, that wasn't bothersome to me. What irked me, however, was the fact that everyone at the office treated me like dirt even though I had a solid work ethic and generally went well above and beyond the call of duty to make other people more money. 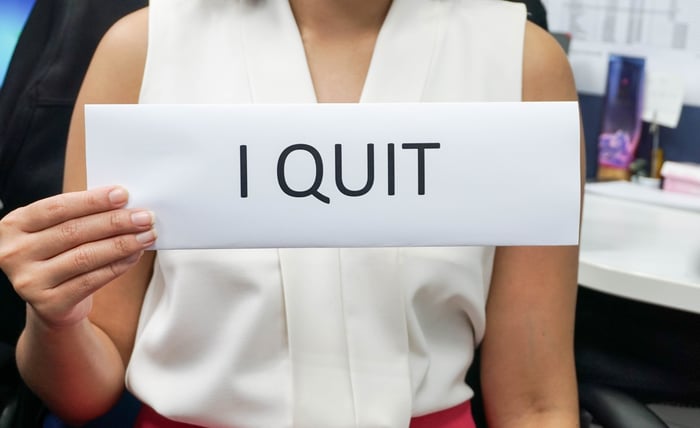 In other words, I wasn't expecting special treatment for it being my birthday. I just wanted the day to go smoothly ("smoothly" being a relative term at an office where fistfights weren't unusual and foul language was the go-to means of communication).

It didn't, though. And that's why I decided that day to quit.

What's funny is that nothing particularly disturbing happened that day. Sure, people yelled at me, but that was par for the course. Rather, there were two related incidents that helped me realize I was done.

The first was when a colleague asked me to jump on a 6:00 p.m. conference call in his place because he had to leave unexpectedly. I politely explained that I had plans after work and had to leave by 5:30 myself -- something I rarely did, but also something I was by no means obligated to clear with him or my boss. Rather than accept my answer and pursue an alternate solution, he proceeded to berate me for wanting to have a social life. Fine.

The next episode happened just moments later. I had finished up my work for the day and was gathering my belongings when another coworker looked up at the clock, saw what time it was, and asked, in the snidest tone possible, "Half day today?"

Now, the last time I checked, working from 8:00 a.m. to 5:30 p.m. is hardly a half day, but to be fair, I'm sure he was trying to be obnoxious more so than inquire as to whether I was actually working half a day. Still, I was done.

I left on time. I went to dinner reeling over the two incidents while my friends tried to distract me with just about every other topic imaginable. And the next day, I composed my resignation letter.

Knowing when it's time to quit

The funny thing is that I really should've resigned from that job years before I did. The environment was toxic, and while the work itself was interesting, it wasn't what I wanted to do with my career. The only reason I stayed so long was that the pay was fantastic, and I was hesitant to give it up. But what made me finally throw in the towel was the fact that as I sat there at dinner that night, I couldn't stop fuming over the events that had just transpired.

Then I realized that I'd been doing the same thing for months -- letting an unpleasant work experience spill over into my personal life and mess with my general well-being. I could no longer let that happen, and so I resigned.

Of course, I did so respectfully. I gave my firm a month's notice, which I was able to do in the absence of having another job lined up. In my official letter, I thanked my boss for taking me on and teaching me a lot, which he actually did. And I made sure to wrap up all major items I was working on before my last day to not leave anyone particularly in the lurch.

I also made sure I was prepared financially to kiss my paycheck goodbye. For months, I'd been adding to my emergency fund to allow myself the option to quit. I also looked into my health insurance options in advance, since I knew I'd need to secure coverage of my own. And I'm grateful I did those things, because they bought me the option to leave when I'd truly had enough.

No one deserves to be miserable at work

Why am I sharing this story now? It's simple: I still have many friends who are utterly miserable at their jobs.

Now obviously, not working isn't an option, since we all have bills to pay. But it pains me to see so many people I know unhappy day in, day out. So if there's one takeaway here, it's this: I was dissatisfied at my job long before I quit, but what drove me over the edge was realizing that I couldn't shake those bad feelings from work even after leaving the office. That wasn't acceptable to me, and it shouldn't be acceptable to anyone.

If you've been unhappy with your job to the point where it's impacted your overall well-being, it's time to start planning your escape. I'm not saying quit on a whim, because frankly, you should really have a backup plan. Rather, I'm suggesting you figure out what it'll take to allow you to quit your job, whether it's more savings and/or a series of leads, and find a way to escape that bad situation. And who knows? It just might end up being the best thing you ever do for your career.