Please ensure Javascript is enabled for purposes of website accessibility
Log In Help Join The Motley Fool
Free Article Join Over 1 Million Premium Members And Get More In-Depth Stock Guidance and Research
By Maurie Backman - May 28, 2018 at 6:18AM

These days, a growing number of Americans are planning to work longer. For some, it's a matter of needing the income. For others, it's a means of occupying their time and avoiding the boredom and restlessness associated with retirement.

But not all seniors who expect to work into their late 60s or 70s intend to stay at their desk jobs. Instead, many are taking the entrepreneurial route so they can enjoy the benefits of self-employment. In fact, seniors 65 and older are more likely to be self-employed than any other age group, according to the U.S. Bureau of Labor Statistics. And while that's a positive trend for older workers, it also means that many companies are losing out on the opportunity to capitalize on the knowledge and expertise of seasoned employees who still have a lot of value to add to their businesses. 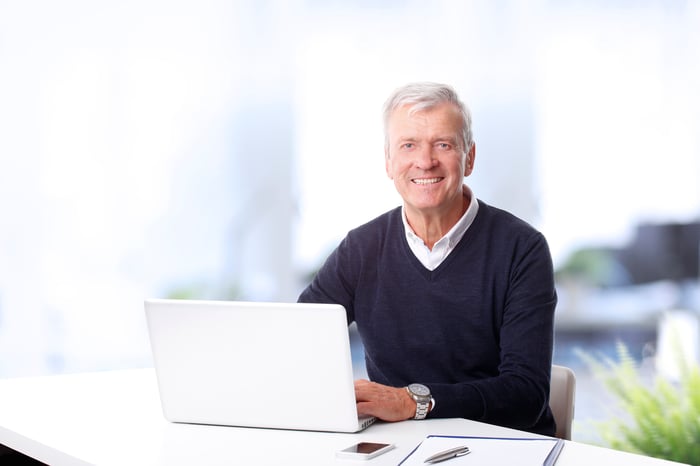 How can you, as a business owner or manager, retain more of your senior workforce rather than lose those key players to retirement or self-employment? The answer might lie in being more flexible.

While workers of all ages appreciate flexible work arrangements, older employees clearly seek out that leeway. According to the American Working Conditions Survey, 17% of older workers set their own hours and schedules on the job compared to just 14% of younger workers. Not only that, but older workers are less likely than their younger counterparts to place a major emphasis on benefits such as insurance or paid time off. What matters most to them is having the ability to control their work schedules.

The value of retaining older talent

There's an inherent benefit to retaining older workers that many companies don't recognize. But one thing you should realize as a business owner or manager is that all of the education and tech savviness in the world generally can't replace years of knowledge acquisition and hands-on experience. In other words, if you're not particularly motivated to retain your senior workers because there's a stream of eager 20- and 30-somethings out there looking to take their places, remember that when you let those older workers go, they take their industry knowledge with them. And that's not something you should be so willing to give up.

Something else to consider is that older workers make great mentors and often are eager to impart their knowledge to younger generations. In fact, having senior staff members on hand could end up saving you a large chunk of money on training and ramp-up programs over time.

Finally, remember that many older workers stay at their jobs because they want to keep working, not because they have to. Of course, this isn't always the case, but many would-be retirees continue plugging away because they derive satisfaction from their work. And it's that level of motivation that could produce some serious output for your business -- output you may not get out of younger workers who are simply there for their paychecks.

It pays to be flexible

Though it generally is good to be flexible with your staff, if you want your senior employees to stay put you may need to hop aboard the flexible-scheduling bandwagon. This could mean allowing workers who have proven themselves to set their own hours, work fewer hours, or telecommute, as needed.

If the concept of flexible scheduling is foreign to you, start slowly and let employees work their way up. If you see a decline in productivity, step in and address it. As a business owner or manager, that's your right. The key, however, is to be open to flexible work arrangements so you don't lose out on key players who have been with the business for decades and still have a ton of insight and drive.