Whether you have a great boss or an overly demanding one, you'll most likely land in a scenario where you're asked to do something you don't want to do. Maybe your manager will ask you to tackle a lowly administrative task you feel is beneath you. Or maybe you'll be summoned to a meeting you have no desire to attend.

Saying no to your boss is hardly easy, and often, it actually isn't warranted. After all, just because you loathe doing paperwork doesn't give you the right to avoid it. And while you might consider meetings a drag, that doesn't let you off the hook, attendance-wise. But there are some situations where saying no is perfectly reasonable. Here are just a few. 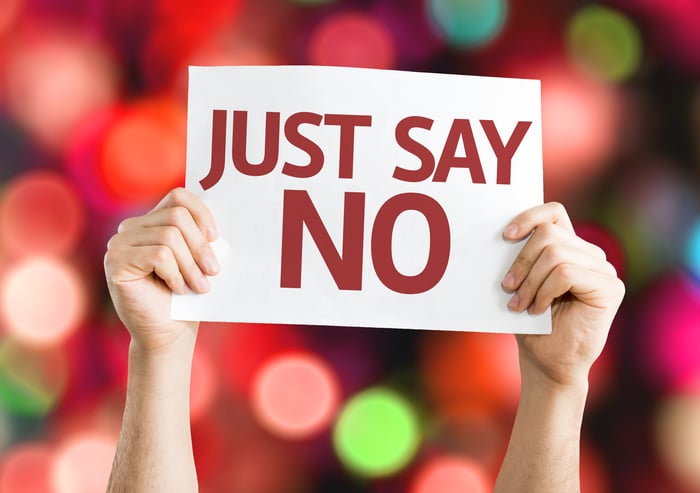 We all work late from time to time, and many of us work late more often than not. If the latter is a common practice at your company, you'll probably have a hard time saying no most of the time. But that doesn't mean you can't ever push back.

At some point, your manager has to realize that you're a person with responsibilities, obligations, and interests outside of the office. And if you're never given a chance to be a person, you're going to burn out very quickly. So if your boss requests that you stay late for what will end up being the fourth or fifth night in a row, politely but firmly explain that you have personal items to tend to that you can no longer put off, and since you've spent the better part of the week working late, you need a night to yourself. Any reasonable manager will understand where you're coming from. And if yours doesn't, it may be a sign that it's time to find a new job.

2. You're asked to take on a new project -- but already have an overloaded plate

It's a good thing to be busy at work, because it means that your company clearly needs you around. But there comes a point when you can only handle so much of a load, so if your manager asks you to tackle a new project and you're already clocking in 50 hours a week or more, you shouldn't hesitate to respectfully decline.

If you explain to your boss that your overall performance will suffer if you're forced to spread yourself too thin, with any luck, he or she will understand. And if not, try masking a no with an alternate proposal along the lines of "Which of my current tasks would you like me to unload to take on this new one?"

3. You're asked to work during vacation

There's a difference between checking your email every so often while away and spending hours at your laptop during what's supposed to be a vacation week. If your boss requests that you do the latter, you have every right to refuse -- politely, of course. Chances are, you've paid quite the premium to get away, and as long as you made a point to tackle your pressing projects and train a backup before heading out of the office, you have every right to enjoy that trip to the fullest, without interruptions.

If your boss isn't the respectful type and insists that you jump in on a given task, you can always play the spotty internet card. Just make sure to stay off social media so your manager doesn't find out and call your bluff.

It's natural to want to please your boss, but the last thing you want to do is risk your personal life and sanity in an effort to boost your reputation. So if you happen to land in any of the above scenarios, don't be shy about speaking up for yourself. You may come to find that it actually helps your career in the long run.