Automation has already taken some jobs. Robots work alongside humans in Amazon distribution warehouses, digital ordering has taken some cashier jobs, and ATMs have eliminated some bank teller positions; there are countless other examples.

Despite that, unemployment has hovered around near-record levels, wages have risen (specifically for many blue-collar/lower education positions), and some companies have struggled to fill open positions. Robots and automation may be becoming increasingly common, but they have not hurt the employment market for human workers (at least not yet).

That, however, could change. You can't stop progress, and the technology exists to replace human workers with automated ones in a number of professions, including both blue- and white-collar professions. Despite that possibility, most workers are not worried about losing their job to automation according to a new Porch.com survey. 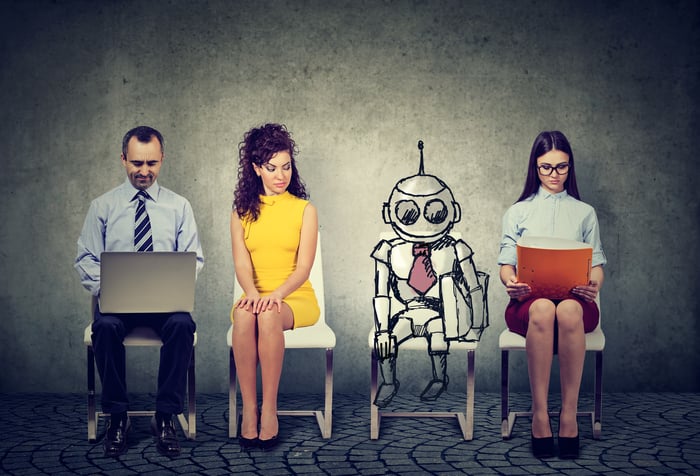 Slightly more workers who consider themselves blue collar (28.9%) believe their jobs might be automated than those who consider their jobs white collar (24.2%) according to the study of 1,000 American workers. The majority of white-collar workers (65.6%) are "not at all fearful" or a robot taking their jobs, compared to 59.2% of their blue-collar compatriots. Another 20.2% of blue-collar and 17.6% of white-collar workers are "slightly fearful."

Despite the fears created by the possibility of automation, the vast majority of blue and white collar workers are optimistic about the future. Three fourths of white-collar workers (76.2%) feel that way, while only 12.5% are pessimistic. On the blue-collar side, 72.3% reported feeling optimistic, compared to 16.8% who are pessimistic.

The number one hedge against automation is education. That's not limited to schooling or getting degrees -- it also includes gaining new skills.

In many restaurant chains where order taking has been at least partially automated, human workers have been shifted into customer-service or back-end production jobs. If you have those skills, it's less likely that you will be let go in favor of a robot or another automated solution.

The same is true for someone who has a white-collar job. Look to get cross-trained so you can work in multiple positions. That's useful even if you have no fear of your position being automated, as being able to do multiple things protects you against traditional layoffs as well.

Assume it will happen

It's important to never be complacent in the workplace. You may be very good, but very few people are actually irreplaceable. Automation and robots are going to change the nature of the American workforce in ways that are already happening and that we may not see coming.

Plan ahead and be ready for change. Take an honest look at the work you do, and consider how it might become automated, or what aspects of it might. Acknowledge the risk, plan for it, and work to make your skill set as flexible as possible.

You might also consider steering into the curve and learning the skills that will be needed in a more automated workplace. That could mean everything from getting trained in robot maintenance to becoming an expert in customer service -- something robots may do well someday, but have not mastered yet.

Be open and creative. Don't be afraid. This isn't The Terminator, it's just a change in how we work, like the creation of assembly lines or the advent of the internet. You can be ready for the future and succeed even if what you do now is someday automated.