If you're in the market for a new job, you're probably aware that your resume will play a huge role in getting your foot in the door. You're also probably aware that your resume isn't a document you should just throw together, but rather it's one that requires a fair amount of thought and effort. Today let's consider five things you may not have known about resumes, courtesy of CareerBuilder, that could help you avoid the mistakes so many job searchers make.

1. A good 40% of hiring managers spend less than a minute reviewing a resume

While you might pour hours into crafting the perfect resume, don't expect those reading it to give yours all that much attention. An estimated 40% of hiring managers spend less than 60 seconds reviewing each resume they receive, and if you think that's bad, 25% spend less than 30 seconds. 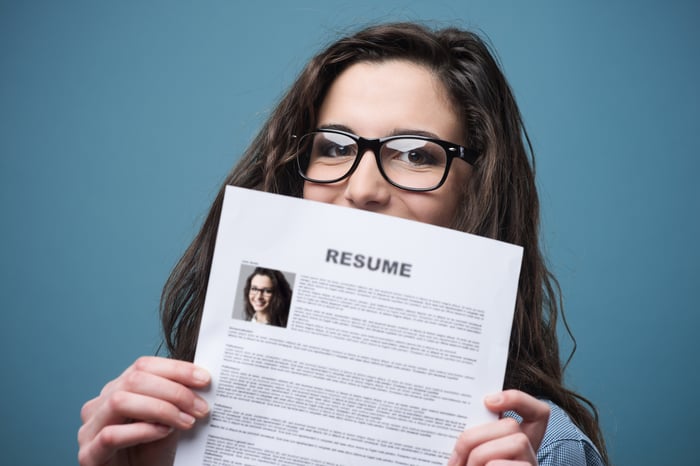 The takeaway? You get a very brief chance to make a good first impression, so make sure your resume is scan-friendly. Highlight major accomplishments rather than bury them, and use hard numbers (think "increased sales by 30%") that are easy to spot during a brief read. Just as important, make sure your resume is visually appealing. That means avoiding hard-to-read fonts and not going overboard with features such as italics and boldface. Rather, save those for the truly important points you want to call out.

2. A whopping 75% of human resources managers have caught a lie on a resume

It's not unheard of to exaggerate a bit on a resume, but flat-out lying is a major no-no. Rather than misrepresent your education or experience, focus on the things that make you a strong candidate for the jobs you're applying to. Better yet, tweak your resume each time you send it out so that you're featuring the skills you do have that make you an ideal fit for the specific role in question.

3. An unprofessional email address is a major problem for 35% of employers

Of all the things on your resume that might cause you to lose out on a job opportunity, having a silly email address shouldn't be one of them. So if you've yet to upgrade to one that reads more professionally, consider this your wakeup call to lose the "beerpongmaster@gmail.com" your friends might be fond of, and instead opt for something more polished, like your first initial followed by your last name.

4. An estimated 77% of hiring managers immediately disqualify resumes because of grammatical mistakes or typos

Though hiring managers don't spend a lot of time reading resumes, glaring errors have a sneaky way of making themselves obvious even during a brief scan. Before you send out your resume, proofread it thoroughly. Then walk away for a good five or six hours and do so again.

Keep in mind that spell-check programs won't necessarily pick up on grammatical errors, so don't rely on yours too heavily. For example, if you state that you "recognize" accounting records instead of "reconcile," that mistake won't get flagged because "recognize" is a correctly spelled word. Reading your resume out loud line by line will increase your chances of spotting such errors and correcting them in time.

Of course, it's hard to pick up on errors when you're the one who wrote that resume in the first place, so if you're worried you won't catch everything, enlist the help of a friend to give that document a thorough read. Having a second set of eyes on your resume could mean the difference between losing out on a great opportunity or landing an interview.

5. A resume that's longer than two pages is a deal-breaker for 17% of hiring managers

If you have an extensive work history, it's natural to want to share it with prospective employers. But if you're not reasonably judicious in deciding which details you include versus which you omit, you could end up turning those same companies off. In fact, 17% of hiring managers won't even look at your resume if it exceeds the two page-mark, so if yours starts creeping into novella territory, bust out your editing cap and start cutting back on content. Remember, you don't need to list every single job or responsibility you've ever had on your resume; you just need to include those that are the most pertinent to the job in question.

A solid resume is the key to landing your next job. Keep these five points in mind before submitting your resume, and if you think you've fallen victim to any of the aforementioned mistakes, go back and correct them before moving forward with your applications. A little extra effort on the resume front could pave the way to an interview, so it's worth putting in that time.