Please ensure Javascript is enabled for purposes of website accessibility
Log In Help Join The Motley Fool
Free Article Join Over 1 Million Premium Members And Get More In-Depth Stock Guidance and Research
By Daniel B. Kline, Selena Maranjian, and Maurie Backman – Nov 8, 2018 at 8:25AM

Be open to learning and you may be surprised.

Seasonal jobs offer more than just some extra cash or a way into the workforce. They allow people to gain new skills, meet new people, and learn life lessons.

Working a seasonal job can be an opportunity. For our panel of Fool contributors, exactly what that means can be different for each person. Still, it's very clear that there's a lot to be gained by taking on a position that has an expiration date. 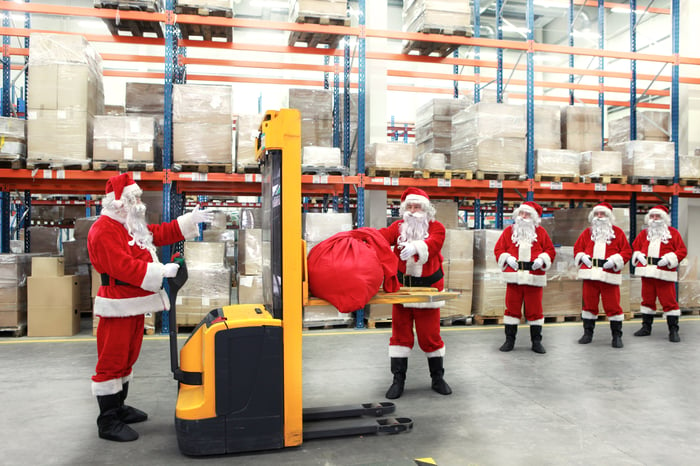 You don't have to dress up as Santa Claus to land a seasonal job. Image source: Getty Images.

You get to know other kinds of people

Selena Maranjian: I haven't had a traditional seasonal job, such as working registers during a holiday rush, but I've worked summer jobs and work-study jobs. Lessons abound in just about any kind of work setting, and a key takeaway for me from those jobs was that it's good to get to know other kinds of people.

At my longtime job writing for The Motley Fool, I've worked mostly with colleagues who, like me, have college degrees and even advanced degrees. We are probably more similar than dissimilar in our financial conditions and standards of living and goals.

But when I was cleaning food off plates and sorting silverware and glasses on a dish line in the bowels of my college cafeteria, I was working with a wider variety of people. Some were fellow students and others were full-time cafeteria workers. When I worked for several summers as a teenager at a nonprofit, my colleagues were mostly middle-aged women who were not moving up any ladder, but just working the same job or same kind of job for year after year.

These jobs helped me appreciate a wider variety of people than just my friends and relatives. By spending time with people my parents' age, I could get to know them and their points of view about their kids, becoming familiar with common problems and joys of that generation. While my dish-line job made it clear that that was not an appealing career choice for me, I did gain a lot of respect for the kind of hard (and boring) work that so many people do for most or all of their lives.

Maurie Backman: A few years ago, a close friend and I were commiserating over the expense of the holiday season when she revealed that to swing all of the events and gifts, she'd need to put everything on a credit card and hope for the best. I suggested that rather than go that route, she apply for a seasonal job at a local retailer. She took my advice, and while she showed up to work on time and did what she was supposed to do, she wasn't particularly enthusiastic about it at first.

But after a few weeks, her attitude changed. I think she realized that the business owner was a caring individual who really wanted the best for his employees, and so she started hustling midway through the season rather than just going through the motions. Her boss, in turn, was so impressed with her work that when her end date rolled around, he offered her a permanent, full-time job. Not only did it pay much more than she expected, but it allowed her to escape a full-time job she hated. And eventually, she managed to work her way up to become an assistant manager.

The lesson here is that you never know when a seasonal job might morph into a permanent opportunity, so it pays to have a good attitude and give it your all. Even if your seasonal job doesn't turn into a long-term gig, it's always helpful to have an extra employer who can serve as a reference when you need one, so if you're searching for part-time work this season, go in with a positive outlook.

Daniel B. Kline: For a few years, I worked seasonally at a temple handling coat check duties during holiday events, bar and bat mitzvahs, and maybe the occasional wedding. Coat check was only offered during the winter months so it was maybe three or four months of one or two nights a weekend on most weekends.

Coat checking for an event involves a short period of being very busy when everyone arrives and another at the end. In between, there's nothing to do, but you have to be there in case anyone decides to leave early.

When you arrive -- usually an hour or so before the event -- there are often coats already there. My first task was to segregate them and make sure I could hand them out as needed to the owners (assuming they could describe them to me). In many cases, they were the coats of catering personnel, some of whom had business reasons for coming and going and others who were maybe just getting some fresh air (or taking a smoke break).

I was always attentive to the needs of this group and made sure they got their coats and knew where they would be in case they left after I was dismissed. It seemed minor, but in some cases, these workers would have trouble getting their coats because they did not have a check and it was just easier to collect them after everyone had gone home.

In correcting that small problem (and being a reasonable person who assumed nobody was scamming me for a single winter coat), I endeared myself to a whole bunch of different catering crews. That generally meant that an extra plate made its way to the coat room, which was welcomed on shifts of four to six hours where I couldn't leave.

I wasn't being nice to get free food as I had no idea that would happen. In reality, I wasn't even intentionally being nice. I was more not being a jerk or behaving reasonably. Still, I learned that you never know if the person you're being nice to might have access to a nice steak, some choice appetizers, and maybe even dessert. Treat everyone as if they could do something great for you. Chances are, some will.