Some people look forward to company holiday parties and the chance to mingle with their colleagues outside the office. Others, meanwhile, search high and low for excuses to avoid those gatherings -- gatherings that are billed as fun but are often more painful than a deep dental filling. No matter how you feel about company parties, however, you should recognize that they're a great opportunity to advance your career. Here are a few ways to make the most of yours.

1. Walk up to new people

You're probably aware that networking is a great way to unearth new opportunities. When we talk about networking, it's often in the context of meeting folks at other companies. But if you work for a larger firm, there might be dozens (if not hundreds) of people internally you have yet to meet in the course of your job. Your company's holiday party can be a great way to introduce yourself and get to know employees in other areas of the business. And in doing so, you might learn what prospects exist with your current employer. In fact, 28% of professionals have learned about a new opportunity at work by attending a company holiday party, according to LinkedIn, so don't be shy about meeting new people. 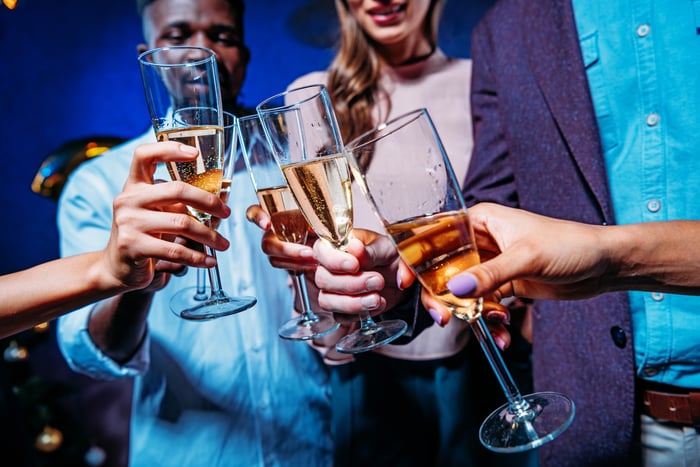 Your company's executive team probably spends a lot of time in meetings and behind closed doors. But those execs are probably more approachable than you'd think, provided they're not up against deadlines or internal crises. Your company holiday party is a great opportunity to spend some time with the people you wouldn't otherwise get a chance to speak to -- something 26% of workers have done at their company parties, according to LinkedIn.

If you're not sure how to start a conversation with your company's CEO, begin by extending a hand, stating who you are and the department you work in, and asking a meaningful question about the company -- something like, "What did you think of our latest marketing campaign?" or "How about that new website?" Or, talk about something other than work. Chances are, those execs want a break from it.

3. Get to know your teammates

Though you don't need to go as far as befriending your colleagues to work well with them, it pays to get to know them on some sort of personal level. And what better way to go about that than over company-sponsored drinks and finger foods? Use a holiday party to talk to the people you work with daily, but don't actually know anything about. You might find common ground with a couple of folks that gives you a deeper understanding into what makes them tick. And that, in turn, could improve your working relationship.

Like them or not, company holiday parties are pretty much mandatory. If you're going to attend yours, use it to your advantage. And who knows: If you survive the upcoming bash, you may not dread it quite as much the next time around.