Whether you work for yourself or for a company, you should strive to continuously get better at what you do. That could mean boosting job-specific skills or working on soft skills that apply universally in today's workforce. Here are a few of the ways two of my colleagues and I have improved over the course of 2018 and why we're now in a better place for it.

Selena Maranjian: In 2018, I got better at using social media professionally. I've long been using it just socially, to keep in touch with friends and relatives and to share amusements or information with others, but I had generally kept my work life separate. That's not best, though, because lots of people in all kinds of careers can benefit by being active on social media. So now I try to promote my articles on my account on Twitter (NYSE:TWTR) and my LinkedIn account -- and I often promote the work of my colleagues, too. (Social media can help you be a good team player and a valued colleague!) Sharing my work with a wider audience means that some of those who like what they see might then share it with others -- another plus. 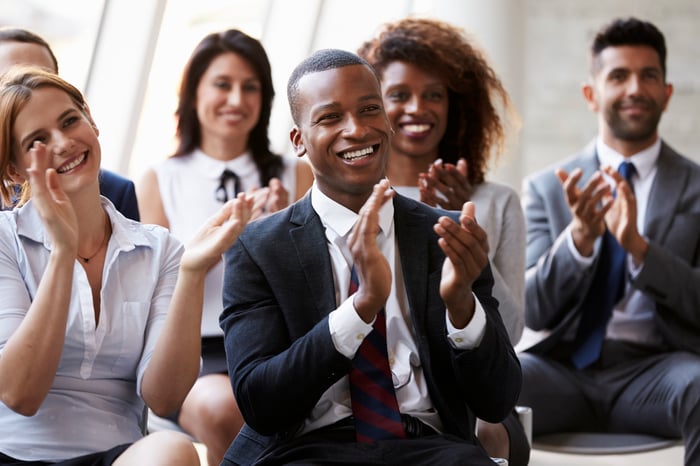 WE THINK WE DESERVE A ROUND OF APPLAUSE. IMAGE SOURCE: GETTY IMAGES.

You don't have to be a writer to make good use of social media. Scientists might share articles or thoughts on various advances or studies, while anyone from healthcare professionals to social workers, lawyers, and teachers might share ideas, experiences, best practices, and interesting work-related articles they've run across. The more you share and get noticed and the more you interact with others, the more connections you can make in your line of work. This can be a great way to network without having to make small talk in person at a social function.

Being active on social media can take many different forms. You might share personal and professional content on the same Facebook (NASDAQ:FB), Twitter, Instagram, and/or LinkedIn accounts, or you might have different accounts for your personal and professional lives. Think twice before sharing anything that might reflect poorly on you on any account, though, because most of what we put out there can never be retracted. You should minimize the chance that an employer or potential employer or other party might run across something they don't like that could cause you grief.

Daniel B. Kline: Before coming to The Motley Fool, I'd held a lot of jobs. In many cases, the reason I left one position for another was my inability to handle change. Maybe my boss moved on, or perhaps the nature of my job changed dramatically. In one case, the newspaper I went to work for was put up for sale on my first day -- leaving me looking for a new gig almost immediately because I didn't want to deal with the potential change in ownership.

In general, it was easier for me to move to the promise of a new job than to accept a changing situation where I was. In my current position, that had not been much of an issue. Throughout my first few years, our team was exceptionally stable, with only the occasional addition or subtraction.

That changed in 2018, however, as four different editors I worked with moved on (two internally to other teams). It was a shocking amount of change that, in the past, would have sent me at least looking for an exit.

Fortunately, I have grown, and I took a deep breath and put my faith in the remaining team. I didn't panic at the idea of change; rather, I forced myself to embrace it with an open mind. That led to making new friends, finding new work partners, and further developing as an employee. It wasn't always easy -- sometimes you want to say, "but that's not how so-and-so did it." But when you work someplace that's collaborative and supportive, it's possible to climb over any hurdle.

Maurie Backman: It's often said that freelancers have a better work-life balance than salaried employees, since we have the option to set our own hours and work when it's convenient for us. The flip side of that, however, is that for some of us, there's always the potential to be working, especially during periods when things are busy.

In the past, I've really struggled to separate work from personal time, because often, I'd feel guilty about not working extra when the option existed, or I'd push myself to work at times that should've been reserved for family or social activities. This past year, however, I got a bit better about more clearly defining my schedule. I blocked off a set number of hours during the day that were allocated to work, and then I incorporated a few evenings each week for that same purpose. But by planning in advance which nights I'd be working and which nights I wouldn't, I was better able to be present for my family and friends.

Of course, sometimes the best-laid plans go awry when you're a freelancer. For example, over the summer, I had a really bad streak during which I had a sick child home every day for a two-week stretch. As such, I had to load up on evening and weekend work to compensate, thereby cutting into some family and social plans. But generally speaking, I have gotten better about mapping out my schedule, and it's made my life less stressful in many ways.