Retirement is often thought of as an all-or-nothing prospect, but the reality is that many older workers would benefit tremendously from a phased retirement. This way, they get the best of both worlds -- the ability to continue working and earning a paycheck, all the while lessening the physical and mental load that becomes tougher to tackle as folks age.

Unfortunately, U.S. companies are overwhelmingly unsupportive of phased retirements. Only 20% offer some type of formal phased arrangement, and most employers have no plans to incorporate one in the future, according to data from Transamerica. Rather, most companies force older workers to choose between one of two options: work full-time, or don't work at all. And when that happens, nobody wins. 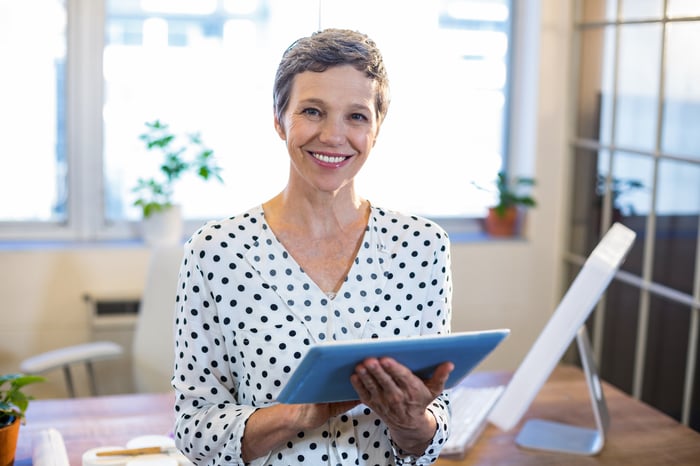 Supporting older workers, and benefiting from them as well

These days, a growing number of older Americans are choosing to work longer, both for the social and mental benefits as well as the financial ones. For many, going to an office is an appealing alternative to spending days on end cooped up in the house, and for those without much in the way of savings, extending their careers is downright necessary.

The problem, however, is that as folks age, their ability to handle the rigorous schedules they once maintained becomes compromised. As such, they risk growing less productive on the job and offering less value. And, they risk their health by pushing themselves at a point in life when their bodies can't physically handle it.

On the other hand, older workers offer a lot of value -- value younger workers often can't bring to the table in quite the same way. Because seasoned professionals have likely seen their share of ups and downs within a given industry, they're well-equipped to offer guidance during periods of prosperity and turbulence. Older workers are also more likely to have established relationships with vendors and partners that can help businesses thrive. And then there's the loyalty factor -- once folks reach a certain age, they're less likely to job-hop, which means they can be counted on to continue performing key tasks for as long as they're able.

And that's exactly why it pays to be flexible with older workers by giving them the option to gradually ease into retirement rather than dive in at full force. Letting older employees scale back their hours over time can make for a much smoother transition on both sides -- those workers continue earning money, and the companies that employ them get ample notice to onboard and train new hires as older workers' hours diminish over time.

Offering phased retirements also allows companies to maintain a degree of goodwill with those employees who have been with them the longest. This means that if a given worker eventually retires in full, he or she might still agree to consult on an as-needed basis, thereby giving employers a sense of security.

Older workers add a lot of value to businesses, so rather than force them to make a choice between leaving their jobs or maintaining a grueling schedule, why not seek a compromise? By supporting phased retirements, companies can continue to benefit from the expertise of their most seasoned employees without needlessly compelling them to up and leave, whether they intend to or not.