Please ensure Javascript is enabled for purposes of website accessibility
Log In Help Join The Motley Fool
Free Article Join Over 1 Million Premium Members And Get More In-Depth Stock Guidance and Research
By Maurie Backman – Jan 17, 2019 at 8:21AM

Searching for talent? Here's where to look, how to attract and sift through the best candidates, and how to close the deal.

With the new year in full swing, now's a popular time for businesses to advertise open positions and get serious about meeting their staffing needs. The problem, of course, is that hiring can be a cumbersome, time-consuming affair, and a costly one at that. Here are a few things your company can do to expedite the hiring process and make it less painful for everyone involved.

One of the easiest ways to make the hiring process more efficient is to source talent within your company. When you hire internally, you don't have to worry about checking references or making sure there's a good culture fit -- those items will already have been tackled. Furthermore, while promoting existing employees won't necessarily help you avoid having to train them in their new roles, they'll at least come in with a basic knowledge of how the business works, thereby leading to a smoother transition. 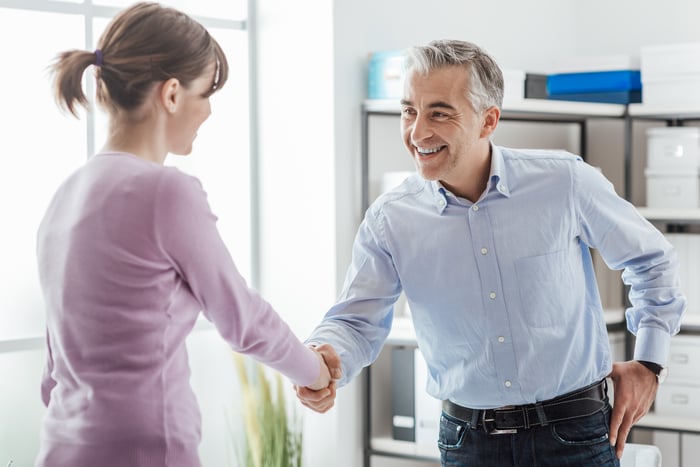 Of course, the downside of hiring internally is that you'll then need to fill the roles the folks you're moving around will be abandoning. But if you're talking about promoting internal people, know that it's often easier to fill lower-level positions than higher-level ones, so you'll come out ahead in that regard.

The more specific you are with the job descriptions you put out, the greater your chances of attracting the right candidates. Therefore, it pays to invest a little extra time in making sure your job listings are detailed and precise. If there are skills or qualifications you're looking for, state which ones are deal breakers to avoid getting piles of resumes you're inevitably forced to toss in the trash. At the same time, give candidates a clear sense of what the work entails so they don't apply only to back out upon realizing they don't want the job.

The interview process can be tricky to coordinate. Rather than go through the motions for every candidate you're considering for a given role, try weeding some out by conducting phone screens. Phone screens are a quick, easy way to vet applicants and ensure they meet the basic requirements at hand, and they're something that a human resources team can generally handle, reserving your hiring managers' time for more important tasks.

The interview process takes almost 24 days on average in the U.S., which can really bottleneck the hiring process. To avoid having that happen, arrange for all key players involved in that process to commit to being available within the same one- or two-week stretch of time. This way, you won't have week-long gaps between candidate meetings, and you'll be better positioned to make decisions sooner.

5. Have your offer letters lined up and ready to go

While some job offers are extended over the phone, there's generally a formal letter to accompany those discussions. But if it takes your HR department a week or longer to produce those letters, you might lose out on impatient candidates along the way. A better bet? Have your HR team gear up those letters once candidates make it to their second interview round. You can always tweak certain details at the last minute, but this way, you're mostly prepared to make those offers official.

The longer it takes you to fill open roles at your company, the more your business stands to lose out. Take these key steps to expedite the hiring process, and you'll save time, money, and loads of aggravation for all of the players involved.