Americans are certainly familiar with the concept of financial debt, but apparently, they're racking up sleep debt as well. An estimated 62% of women and 52% of men feel they need more sleep, according to a study by Mattress Inquirer, and if they don't change their habits, they'll risk damaging their health as well as their careers.

Is sleep debt hurting you?

If you're not familiar with the concept, sleep debt is the cumulative effect of not getting adequate sleep on an ongoing basis. When you subject your body to a glaring, continuous lack of sleep, you face near-term issues like short-term memory problems and trouble with concentration -- factors that can make it difficult to do your job. In the long run, the consequences are even more serious, as sleep debt has been linked to ailments such as Alzheimer's disease, obesity, and diabetes. 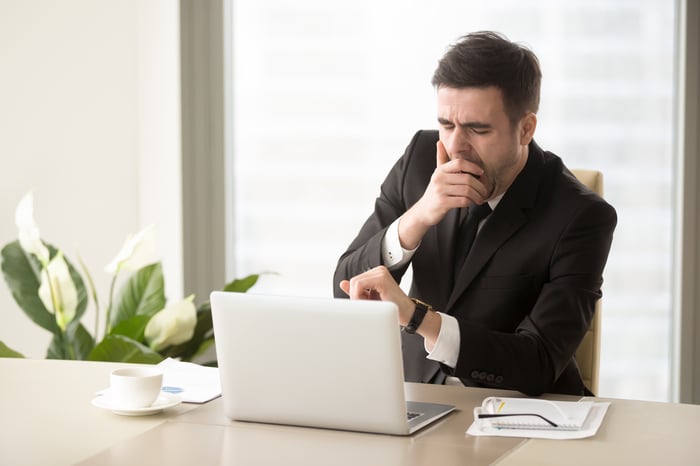 Sleep debt can also affect your outlook. After all, it's hard to maintain a positive attitude when you're downright exhausted, and that, in turn, can impact the way you approach challenges on the job.

Of course, most Americans agree that more sleep would serve them well. A good 79% of women and 73% of men say that getting more sleep would make them happier, while 81% of women and 72% of men acknowledge that it would improve their health. Yet carving out more time for sleep is easier said than done when work- and life-related obligations get in the way.

If you're stuck in a seemingly endless cycle of sleep debt, it's imperative that you take steps to get more shut-eye. Otherwise, you'll be setting yourself up to fail personally and professionally.

Ironically, work-related pressure often causes us to fall behind on sleep. But when we don't get enough sleep, we put ourselves in a position to work less efficiently or make mistakes on the job. A better bet? Set boundaries on the work front so that you're not forced to sacrifice sleep in order to get your job done. That could mean forcing yourself to leave the office by a certain hour on a regular basis, or barring yourself from logging on and checking work emails after a specific point each night.

Of course, sometimes, not getting enough sleep isn't due to a lack of trying. Often, we'll put ourselves to bed only to toss and turn as life's hard-to-shake stressors prey on our minds. Those might include things like project deadlines, co-worker conflicts, and boss-related troubles. Therefore, it pays to identify a pre-bedtime relaxation method that helps you turn off your worries, thereby making it easier to fall asleep and stay asleep. That might involve taking a warm bath, dabbling in aromatherapy, or listening to some gentle music. Play around with different options and see what works for you.

Finally, understand when you're most likely to struggle with sleep, and plan around it. In the aforementioned study, respondents lost the most sleep on Sunday nights -- perhaps as a result of worrying about the workweek. If your personal pattern is similar, take steps to address it. For example, if you carve out 30 minutes to prepare for the workweek earlier in the day, you might be less stressed by the time you're ready to go to bed.

Sleep debt can hurt you in more ways than one, so if you've been known to skimp on sleep, get better about making it a priority. Otherwise, your performance at work is likely to suffer, and your health is likely to follow suit.