Please ensure Javascript is enabled for purposes of website accessibility
Log In Help Join The Motley Fool
Free Article
Join Nearly 1 Million Premium Members And Get More In-Depth Stock Guidance and Research
By Daniel B. Kline – Jan 21, 2019 at 9:46AM

it's not always easy, so you need to have a plan.

When you have a traditional office job, there tend to be barriers between work and home. You may put in long hours or bring some work home, but once you reach the career point where you get paid a salary, instead of hourly, you make a guaranteed amount of money each week.

As I'm a self-employed freelancer, that's not the case for me. I'm lucky enough to have a steady supply of work as a Motley Fool writer, but I only get paid for work I complete. That means that I'm not bound by the normal office schedule, which can be a positive and a negative for my wife and 14-year-old son.

For example, I'm writing this on the Sunday of a holiday weekend from a coffee shop. Nobody's making me work, but I cut out early on Friday to take my family to a theme park on Saturday. That was fun -- and it's great that I can leave whenever I want without asking anyone  -- but it left me at a work deficit for the week, which means I have to sacrifice some family time. 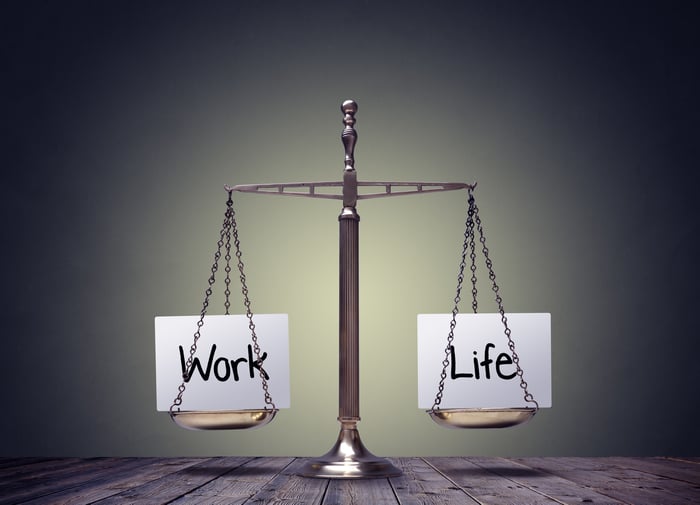 It's not always easy for a self-employed freelancer to keep a life/work balance. Image source: Getty Images.

When you work an office job, your hours tend to be 9 to 5 or some variation on that. Not being at work when other people are generally requires taking time off or at least letting someone know. I'm not bound by those hours and rarely work them. Instead, I stop each day at 3:30 to pick my son up from the bus, and some days I don't go back to work after.

Being able to do that requires both organization and sacrifice. I know exactly how much money I want to make each week and roughly how much time that takes me. To make that happen, and to still have flexibility for family time, I start my day before 7:30 during the week, and I put hours in most weekend days when my wife and son may not be out of bed yet.

There's a method to my seven-day schedule. I try to work during times when it's not coming at the expense of family time. Right now, for example, my wife is grocery shopping and my son is playing in a Pokemon tournament. Neither needs me for their activity, or particularly wants me there, so this is an excellent time to play catch-up, even if I'd rather be watching NFL pregame shows.

Make time for both

My wife and son understand how my job works. They both know that flexibility comes with trade-offs. During the recent school break, for example, my son understood that for me to take two full weekdays off so we could go on a four-day cruise, I would need to work more before. That meant that while during most of his vacations our afternoons would involve movies, arcades, or other outings, this time there were some lunch breaks and not much else.

Call it planned sacrifice. I knew what I had to do to be able to get on board and (mostly) leave my laptop behind. The same logic applies when my wife asks me to take an afternoon off to deal with household issues or attend a school event.

It's possible to have work/life balance as a self-employed freelancer, but it takes more discipline than I ever needed in my office job/traditional paycheck days. It also requires communication and negotiation. If my son wants to hit the theme parks or take a beach break during his March break, we can, but that might mean some weekends where he has to accept that I'll be banking some work, and that has to be discussed.

Working for yourself requires discipline and a willingness to work hard but sometimes leave money on the table. I could make more money if I neglected my family more. The cash is tempting, but the cost to earn it can sometimes be too high. As much as a self-employed freelancer needs to do the work, he or she also needs to recognize that money is not the only priority.