Please ensure Javascript is enabled for purposes of website accessibility
Free Article Join Over 1 Million Premium Members And Get More In-Depth Stock Guidance and Research
By Maurie Backman - Jan 31, 2019 at 9:19AM

Whether you're tasked with internal recruiting at your company or are attempting to build a team of your own, you're probably aware that attracting the right talent is easier said than done. And in today's healthy job market, edging out the competition is harder than ever, making it more difficult to find quality candidates for the roles you have open.

Many companies are therefore choosing to improve their odds, and perhaps streamline the hiring process, by tapping their own internal employee pools and asking them to refer strong candidates. Some are even taking things one step further by offering incentive bonuses to those whose referrals actually result in a hiring situation. The question is: Is offering employees bonuses for referrals a smart practice, or is it more likely than not to backfire? 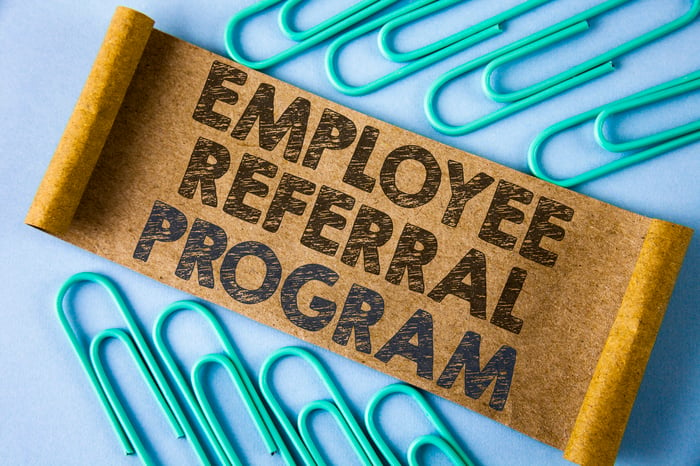 When you need your employees' help with recruiting

Incentivizing employees to refer candidates for open positions can benefit your business in several ways. First, you might save yourself a world of time and money by having your workers source potential hires for free, as opposed to having to pay outside recruiters. Also, by turning to your internal team for referrals, you'll know you're getting pre-vetted candidates who are more likely to work out than random folks who apply over the internet.

On the other hand, by offering financial incentives to workers who source talent for you, you run the risk that employees might refer candidates for the sake of getting that bonus. After all, money is money, and who couldn't use more of it?

That risk, however, is relatively low, and here's why: Employees who refer underqualified candidates for open jobs put their own reputations at risk. By referring a lackluster candidate, a given worker might snag a $1,000 bonus, but if, in doing so, that same worker kills his or her chances of getting a promotion that comes with a $5,000 salary bump, he or she isn't going to take that risk.

Then again, you might not need to entice your internal folks to refer candidates with money at all. Those who love working at your company might be more than happy to bring associates of theirs into the fold. Also, by referring candidates, your employees get an opportunity to build their own teams -- teams they'll be excited to work with on an ongoing basis. Finally, keep in mind that unless you're offering up a lot of money for referrals, it might not motivate your internal workers to do all of that legwork. After all, they only stand to benefit financially if the candidates they bring in actually get job offers and accept, so if the monetary reward is small, it might not influence them one way or another.

While offering employees bonuses for referrals isn't a bad idea, it also might not be a necessary one. In fact, you might be better off reserving that money for companywide perks that make your office a better place to work. That way, your employees will be naturally inspired to encourage their brightest, most hard-working contacts to apply.