Please ensure Javascript is enabled for purposes of website accessibility
Log In Help Join The Motley Fool
Free Article Join Over 1 Million Premium Members And Get More In-Depth Stock Guidance and Research
By Maurie Backman - Feb 14, 2019 at 9:18AM

And it's on employers to change that.

In today's competitive job market, it's more crucial than ever to make sure your employees are reasonably content where they are. And that means helping them feel appreciated, no matter what role they play within your organization.

In fact, 95% of employees say that on-the-job recognition is a big part of maintaining a positive company culture. At the same time, a good 30% of today's workers feel undervalued on the job, according to data from Snappy Gifts. Here are a few critical steps to take so that your employees don't start feeling the same -- and jump ship because of it. 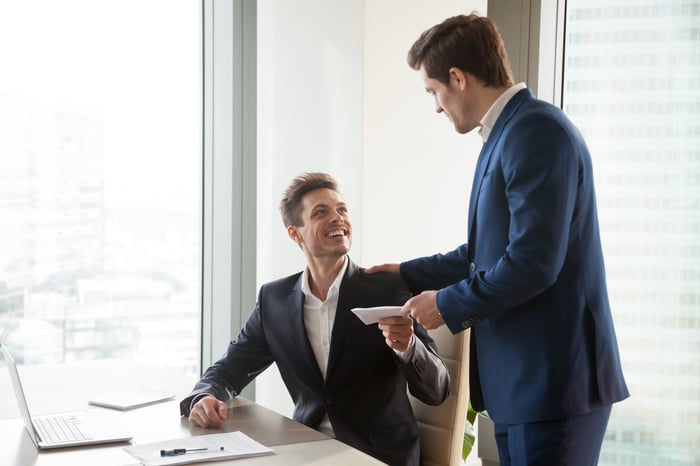 1. Ask for their input

Sometimes the mere act of asking for a worker's opinion is enough to make that person feel like he or she adds value to your company. The next time there's a new initiative being rolled out, or a process change under consideration, poll your team members individually and request their input. Giving workers a voice will make them feel more important, all the while boosting their self-esteem.

2. Be generous with praise

You expect your workers to come to the office and do the things they're supposed to do, but when they go above and beyond, they deserve to be recognized for it. As such, make a point of dishing out praise both publicly and privately. That could mean sending a quick email acknowledging an employee's contribution to a major project, or thanking that person at a companywide meeting. Or both.

Not every effort on your employees' part translates to direct success. If you have workers who consistently strive for results but don't always get them, it's just as important to recognize their efforts as it is to praise those employees who do hit certain goals. This will help your workers avoid getting discouraged if their hard work doesn't pan out as planned, all the while sending the message that they're still valued even if they've had some recent setbacks.

A solid workplace benefits package -- one that includes great health insurance, a retirement plan, and ample paid time off -- sends the message that you care about your employees. But if you want to make your workers feel valued as individuals, reward them in subtle yet meaningful ways. For example, if you have a small group of people who have been plugging away on a tough project, treat them to a congratulatory lunch once certain milestones have been met. Similarly, you might offer up a modest award (say, a $25 gift card) for the IT person who resolves the most computer glitches each month, or the salesperson who gets the most clients onboarded. These little treats aren't life-changers, but they do send the message that you appreciate a job well done.

The more valued your employees feel, the more likely they are to put forth their best effort and remain loyal to your company. Be sure to acknowledge the many people it takes to keep your business running -- it'll go a long way toward improving morale and retaining the talent you worked hard to cultivate.