Please ensure Javascript is enabled for purposes of website accessibility
Free Article Join Over 1 Million Premium Members And Get More In-Depth Stock Guidance and Research
By Maurie Backman - Feb 22, 2019 at 7:17AM

You're not well, and getting to work just isn't going to happen. Here's what to tell your boss.

Sometimes, despite our best efforts to stay healthy, we end up falling victim to unwanted germs and the illnesses they produce. It's not uncommon for workers to call out sick (or, in most cases these days, email out sick) around this time of the year, when winter is in full force and coughs and sneezes abound. But there's a right way and a wrong way to call out sick, and striking that balance will help you maintain your credibility in a world in which it's easy enough to fake an illness -- and have your manager suspect you of doing so.

Figuring out how much to say when calling out sick can be tough. After all, you don't necessarily want to send your boss an email with a simple, "Sorry, I'm not feeling well today and need to stay home." Doing so almost seems too generic, and that could lead your manager to think that you might be gaming the system. 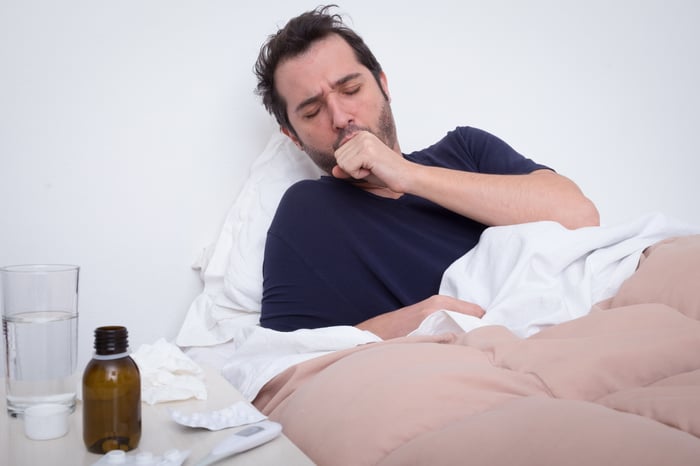 But going to the opposite extreme isn't necessarily appropriate, either. You might very well be trapped in the bathroom with a merciless stomach bug, but your boss doesn't need to know how many times you've vomited or dry heaved. In fact, if you share too much information, you might lead your manager to suspect that you're concocting a story in an effort to sound believable.

The solution, therefore, might be middle ground in nature: Offer a few light details about your illness, but don't get too specific. For example, you might email your boss and say, "I have a stomach virus and won't make it in to the office today," or "Sorry, I'm stuck in bed with a migraine." This way, you're offering up some explanation without oversharing.

Of course, sometimes, you wind up in a scenario in which the timing of your illness looks suspicious. For example, calling out sick the day after a holiday weekend might lead your manager to think that you're perfectly fine but wanted to extend your vacation. If that's the case, apologize for the poor timing, but leave things at that. You might say, "I'm so sorry to have to do this following a long weekend, but I woke up today with a fever, and I can't make it in." If you have a good reputation at the office, your boss will most likely chalk it up to an unfortunate coincidence rather than an attempt on your part to take advantage of your company's sick-day policy.

Keep those germs to yourself

As uncomfortable as it can be to call out sick, don't let your concerns about how you do it prompt you to come to work when you're under the weather. Much of the time, all you'll end up doing is infecting your colleagues, prolonging your own illness, and setting yourself up to make mistakes. Rather than go that route, take your sick time as needed. If you're well enough to answer some emails during the day or hop on a conference call from the comfort of your bed, then go for it. But don't avoid taking sick time because you're not sure how to convey that message to your boss.