Please ensure Javascript is enabled for purposes of website accessibility
Free Article Join Over 1 Million Premium Members And Get More In-Depth Stock Guidance and Research
By Daniel B. Kline - Mar 8, 2019 at 7:18AM

It helps to have a set schedule.

Most Americans aren't getting enough sleep. Exactly how much shuteye each person needs varies based on their internal chemistry, but experts recommend between seven and eight hours as a minimum (and some people need even more).

Despite knowing that getting the proper amount of rest is important, 62% of women and 52% of men feel they need more sleep, according to a study by Mattress Inquirer. That's bad news, because new research shows that people who go to bed and wake up at the same time each day are not just happier, they're more successful.

That's a tad ironic, because in many cases people sacrifice sleep because they think spending the time on work will help them get ahead. Of course, that's not the only reason people don't get eight hours in the sack each night -- but no matter why you're not sleeping enough, chances are you'd benefit from a consistent eight hours in dreamland each night. 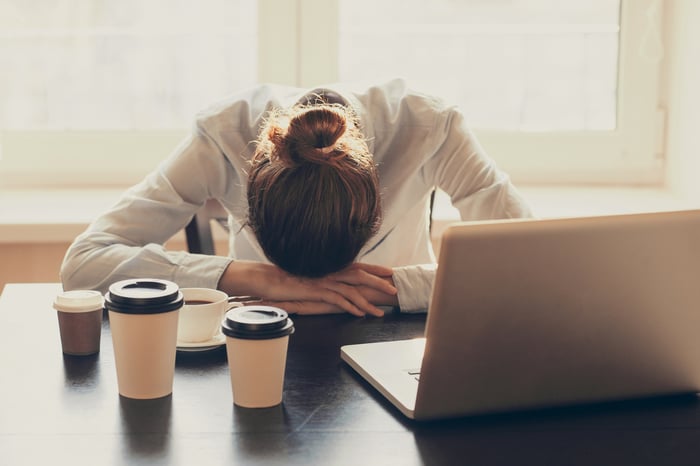 Not getting enough sleep can lead to poor productivity. Image source: Getty Images.

There are times in your life when you don't fully control your sleep habits. If you have a baby or even a young child, consistent sleep patterns may not be possible. If that's not the case for you and you're not consistently getting seven to eight hours, then you have to examine why.

Are you making foolish choices? Do you stay up to watch TV or play video games? Are you eating or drinking too close to bedtime (either can keep you up or disrupt sleep patterns).

The first step is identifying the eight hour period when you should be sleeping. Basically, work backward from when you have to be up in the morning and subtract eight hours. Once you have your bedtime, stick to it. Even if sleep is slow to come, rest or meditate. Be in bed and try to not feel a pressure to fall asleep.

This is an area where routine helps. Dedicate the hours you need to sleep to that purpose and hopefully your body will eventually respond.