Getting promoted is a good thing -- until you realize your colleagues aren't happy about it.

After spending months and months hustling at work, you finally got what you were looking for -- a promotion. And that's certainly something to celebrate, especially if it means more money.

But what happens if your coworkers aren't celebrating with you? If they're jealous of your promotion or feel slighted that they weren't chosen to advance, it could impact your relationships and turn an otherwise positive milestone into a negative one. Here's how to cope when your coworkers don't seem all that thrilled that you've managed to climb the ranks.

1. Get inside their heads

If your colleagues are hardly quick to congratulate you following a promotion, you might easily feel hurt. Try not to. Instead, put yourself in their shoes. Imagine the thoughts that might swirl through your mind if you were the one passed over for a promotion. Chances are you'd feel angry, offended, and perhaps even insecure. 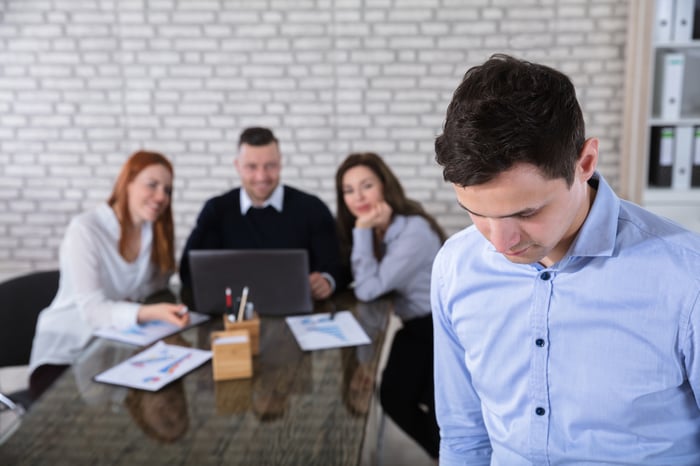 Before you judge your coworkers too harshly for not busting out the champagne on your behalf, remember that there are probably a lot of bruised egos at play and that their attitude isn't necessarily an expression of ill will toward you. Rather, it's their way of processing the fact that they didn't get what they wanted.

If you've always maintained a solid relationship with your colleagues and they've been less than supportive since your promotion was announced, talk to them about it openly. Sit them down individually and acknowledge your fortune and their disappointment. Don't implore them to put their feelings aside and join in your celebration -- that may be unrealistic for them right now.

But don't just talk. Ask if there's anything you can do to soften the blow. And if your promotion means that you'll soon be in charge of people who were once on your same level, discuss that change and aim to reassure your colleagues that you have every intention of making their lives at work as pleasant as possible.

Before wrapping up that conversation, affirm your desire to remain on good terms despite this turn of events. Make it clear that you value the relationships and, if applicable, friendships you've built at work and that you're willing to do everything you can to retain them.

It may take some time for your colleagues to come around and be happy for you following a promotion. Give them that leeway and a little space. But do speak up if their feelings of disappointment turn into full-fledged animosity. Frankly, you don't deserve that, and if their behavior makes your life miserable at work, there are probably some HR violations at play that you have every right to report.

In an ideal world, your colleagues would be helping you celebrate the fact that your hard work has earned you a promotion. But if that's not your reality, give things time to turn around. Once your coworkers get used to the idea that you're moving up and they're staying put, they might learn to accept it and find a way to be happy for you.