These days, a large number of companies grant employees permission to work from home, whether on a partial or full-time basis. It's mostly a positive thing, because it gives workers more flexibility to get their jobs done while also maintaining the other responsibilities that come with being a functional adult.

Working from home can also be a huge money-saver. Not having to commute, for example, could translate into thousands of dollars a year in savings for those who would otherwise have to pay for fuel or costly bus or train passes. And having access to a home kitchen often removes the temptation to go out and buy lunch from more expensive restaurants or cafes. 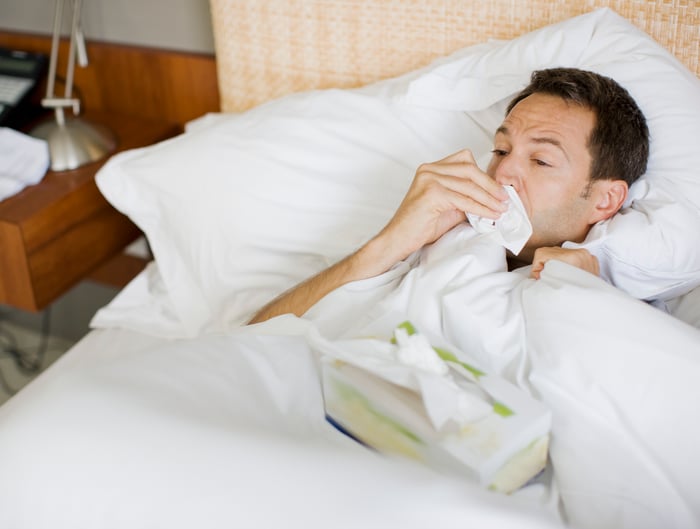 Still, there are a few drawbacks to working from home, and the ones that often come to mind are isolation and communication issues with colleagues. But here's a lesser-known side effect of working from home: feeling like you can't call out sick.

When you work in an office, coming to work sick means spreading germs, infecting others, and incurring the wrath of the people around you. When you work from home, however, it's possible to plug away at your laptop without inadvertently sneezing, coughing, or breathing on anyone. As such, many remote employees feel compelled to push through the workday even when they're clearly under the weather.

On the one hand, that's commendable, and it shows dedication to the job. But if you're really not feeling well, depriving yourself of a sick day just isn't smart.

People who work in offices and call out sick don't just do so to avoid getting other folks sick; they stay home so they can rest and recuperate. If you're running a fever or are so tired you can barely keep your head up at your home office desk, that's your body's way of telling you that you need a break and ought to be in bed. Therefore, don't shy away from calling out sick just because you happen to work from home. If your employer offers sick days as a benefit, then you're entitled to them just like everybody else.

Of course, this isn't to say that shouldn't try to power through the workday when you're feeling sort of unwell, but fine enough to tackle your most pressing tasks. There's a difference between a nasty cold and a full-blown, fever-producing virus, so if you're dealing with the former, then sure, go ahead and answer emails, dial into meetings, and get those reports in by their respective deadlines. But if you're grappling with the latter, pick up the phone and tell your boss you won't be logging on that day.

Remember, you can always make up the work you miss at a later point in time. But if you force yourself to work through periods of illness because you can do so from home, you might prolong your misery, risk making mistakes, and ultimately wind up hurting yourself in one way or another.