Please ensure Javascript is enabled for purposes of website accessibility
Free Article Join Over 1 Million Premium Members And Get More In-Depth Stock Guidance and Research
By Maurie Backman - Jul 13, 2019 at 7:03AM

Many workers look forward to using their vacation time, especially those who put in long hours and desperately need a break from the daily grind. But new data from LinkedIn reveals that employees aren't escaping the office to the extent they should be. And that's a problem on many levels.

Workers aren't getting a real break

It's one thing to answer a single urgent email while on vacation, but it's another thing to log in daily. Yet 59% of employees admit that they actively engage with work emails or phone calls while on vacation, checking in at least one time a day, if not more.

Not all that surprisingly, Gen Zers -- today's youngest employees -- stay the most connected while on vacation among all generations in the workforce, with 86% actively engaging in work activities when out of the office. And the reason could boil down to the fact that younger workers feel less secure in their jobs, and therefore feel more pressured to stay current on work matters, even when they're taking the time off they're entitled to. 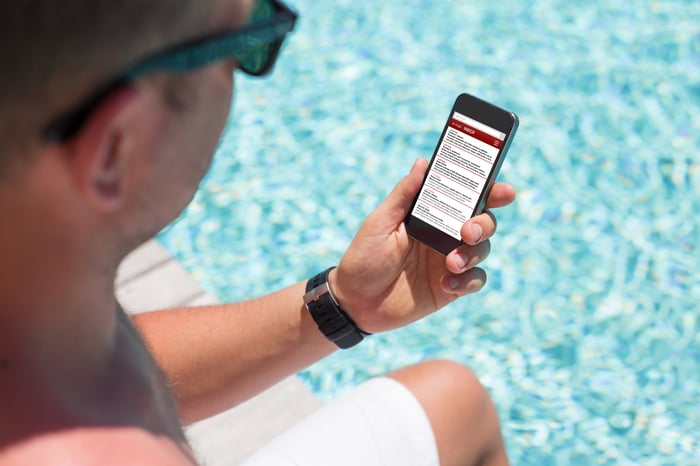 But age isn't the only factor that influences workers' likelihood of checking in on work during vacation; compensation plays a role as well. In fact, LinkedIn uncovered a direct correlation between dollars earned and workers' tendency to disconnect while on vacation. Specifically, it found that 61% of workers who make under $25,000 per year never engage with work emails or phone calls when away. On the flip side, 93% of workers earning between $180,000 and $200,000 a year respond to work emails or calls while on vacation at least once daily, if not more. The primary reason? They're afraid to fall behind on job-related responsibilities.

Co-workers are compounding the problem

While it's clear that workers today have a hard time unplugging when they're supposed to be on vacation, the fact that their colleagues tend to pull them back into work matters doesn't help. A good 73% of employees say they've been contacted by a co-worker while taking paid time off at least once, and 49% of them claim they were contacted by colleagues on more than one occasion while trying to get a break.

Taking vacation isn't just about doing new things or sitting by a pool; it's about getting a true mental break from work-related responsibilities. Employees who fail to snag that break often wind up burning out, and once that happens, it's hard to motivate them to perform well. Therefore, it's on employers to help ensure that workers who take vacation actually get to use that time for themselves.

If you're a manager, one thing you can do is implement a backup system where employees buddy up and cover one another during vacation periods. This could largely eliminate the need for workers to check emails constantly while away, or feel compelled to take phone calls. Furthermore, you can work with employees to identify optimal times to take vacation -- think slower periods during the year when their absence may not be felt as much.

At the same time, make it clear to your employees that they're not required to check emails or voice mails while away and that they're entitled to spend their vacation time relaxing and not dealing with work. The more you support your employees in getting away, the greater your chances of having them come back from vacation feeling refreshed, renewed, and ready to dive back in.