Please ensure Javascript is enabled for purposes of website accessibility
Log In Help Join The Motley Fool
Free Article Join Over 1 Million Premium Members And Get More In-Depth Stock Guidance and Research
By Maurie Backman - Aug 6, 2019 at 8:36AM

Hint: It's something many of us are guilty of.

There are various things you can do to further your career and boost your income. For example, you can learn new skills, volunteer for challenging tasks no one wants, or simply have a positive attitude in the workplace. On the other hand, certain actions on your part could cause your wages to remain stagnant -- things like having a bad attitude, not paying attention to detail, and showing up to the office late.

The latter offense is one many people are guilty of, but it could hurt your career in more ways than one. According to a survey by WatchUSeek (a website all about watches, as the name implies), people who are early to work make $2,500 more per year, on average, than those who are late. 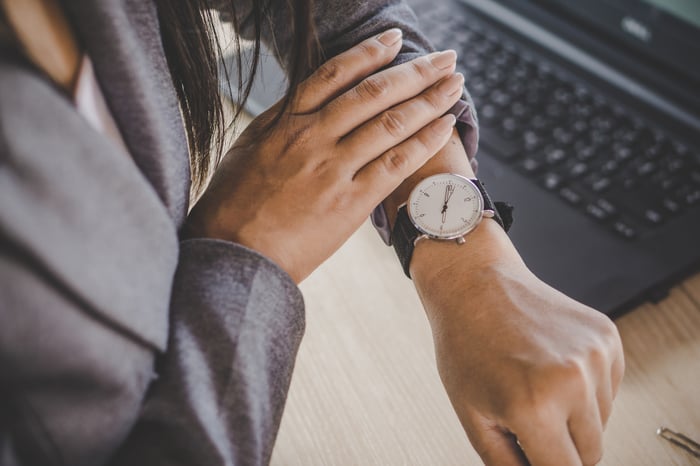 Latecomers are also more likely to be let go from a job. An estimated 37% of late people have been fired, compared to roughly 24% of early people and 27% of on-time people.

Of course, many people who arrive late to work on a consistent basis don't do so intentionally or to be disrespectful, but rather because they simply have difficulty being on time. If that sounds like you, here are a few tricks that might help you be more prompt.

You probably leave yourself a certain amount of time in the morning to get ready for work, but if you're underestimating how long key tasks take you, you're likely to continue being late. For example, you might think you only need eight minutes to take a shower, but if you tend to average 15, it could explain why you're late so often. The same holds true for your commute. You might be 20 minutes away from your office in theory, but if traffic typically makes it 30, you'll need to build in that buffer.

Therefore, time your various morning tasks over the course of a week and see how long it takes, on average, to complete each one. Then total up those numbers and make sure you're setting your alarm with enough time to not only complete your routine, but give yourself an added cushion.

2. Prepare as much for the workday as you can in advance

Some of us move slowly in the morning, both physically and mentally, and that can contribute to chronic lateness. To remedy that, do as many tasks as you can the night before to avoid having them take up time in the morning. For example, lay out your clothing so you wake up knowing what you'll wear to the office, and pre-pack your lunch so that all you need to do is grab it from the fridge and run out the door.

3. Set your clocks ahead

If you're a late person, you've probably tried the old "set your clocks ahead" trick before. But if lateness is a problem for you, it doesn't hurt to try again. Yes, you will, in theory, know that your clocks are fast, but when you're tired and rushing around in the morning, you might forget that fact and be prompted to hurry.

Being late to work on a regular basis reflects poorly on you, and it could compromise your ability to get raises, land promotions, or even keep your job. While you may not manage to become an early bird, you should, at the very least, aim to show up to the office on time. And who knows? You might find that your days are less stressful because of it.