Please ensure Javascript is enabled for purposes of website accessibility
Log In Help Join The Motley Fool
Free Article Join Over 1 Million Premium Members And Get More In-Depth Stock Guidance and Research
By Daniel B. Kline - Oct 2, 2019 at 6:33AM

Heading into the holiday shopping season, there are nearly 6 million open positions.

The United States economy continues to add jobs and see wages rise higher, though both are increasing by modest amounts, according to Glassdoor's "Job Market Report" for September. The number of new openings grew by 3.5%, a decline from August's over-5% increase, while annual pay growth was 2.1%, higher than the 1.9% recorded in the previous month.

"Today's growth is a far cry from the blockbuster job market in 2018," said Glassdoor senior economist Daniel Zhao in a statement emailed to The Motley Fool. "Job openings on Glassdoor remain just shy of the 6 million mark, indicating a tight labor market with employers still looking for increasingly scarce workers to fill their open roles."

It's also possible that companies are hesitant to advertise open jobs if they have more critical roles to fill and lack applicants for those positions. The general lack of bodies may put a damper on hiring enthusiasm, which will soon face added pressure from holiday-season seasonal hiring. 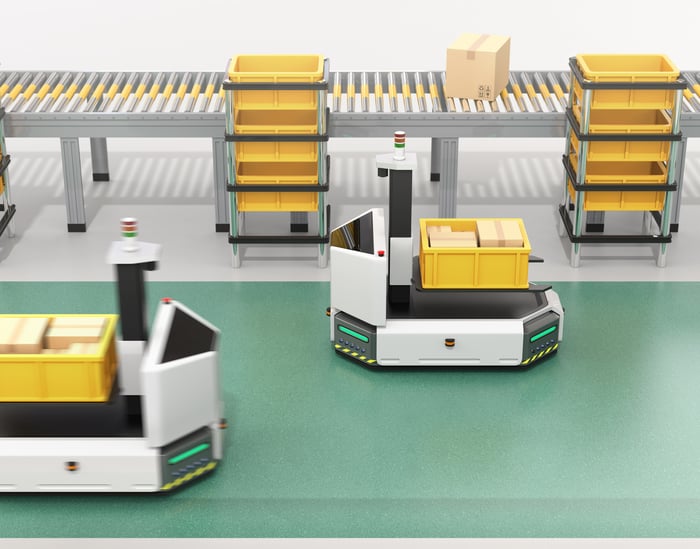 Some jobs, like the biggest gainer, "warehouse worker," could be automated. Image source: Getty Images.

These are the jobs with the biggest increases

Median annual pay has climbed to $54,179. The 2.1% rate of growth for September is "slightly above the rate of pay growth we've seen in the last four months, but still below the 2.6 percent average pay growth we saw in the second half of 2018," wrote Zhao.

"Accelerating wages would be a welcome sign that the longest economic expansion on record is passing on gains to American workers after years of stubbornly low wage growth," he said.

It's worth noting that the five jobs with the biggest percentage increases also pay below-median salaries. Only four of the top 10 actually exceed the median.

Not all lower-paying jobs saw increases. "Loan officer," which pays a median salary of $47,062, had a 2.6% decrease. It's possible that that position, along with some of the others on the list, saw wages fall due to an increase in automation lessening demand.

What does this mean for the economy?

At some point, the lack of available workers to fill open jobs will force companies to take action. That could mean using robots or other automation to fill some positions, as is being done by some major retailers now in limited ways. Wages could also be forced higher in professions where there's a shortage of trained workers for jobs that can't easily be automated.