Please ensure Javascript is enabled for purposes of website accessibility
Log In Help Join The Motley Fool
Free Article Join Over 1 Million Premium Members And Get More In-Depth Stock Guidance and Research
By Maurie Backman - Oct 15, 2019 at 8:18AM

Here's what to do if it happens to you.

It's not unusual to find yourself on the receiving end of workplace hostility from time to time. For example, if you have one or two nasty colleagues who tend to lash out when things don't go their way, or simply feel threatened by you, then you might have a few choice words thrown your way on occasion. Or, your boss might yell at you repeatedly over a seemingly minor blunder, causing you an undue amount of stress and misery in the process.

But while it's one thing to occasionally get mistreated at the office, it's another thing to have it happen constantly. Once a pattern of ill-treatment emerges, it can quickly cross over to bullying.

Unfortunately, bullying isn't just something that happens in the schoolyard. A good 90% of employees today say they've been bullied by a co-worker or a manager, according to new data from Monster. And that's problematic for multiple reasons. First, it can make your job unbearable. Second, it could drive you away. In fact, 65% of bullied employees ultimately lose their jobs, often because they leave voluntarily to avoid further mistreatment, but sometimes because they're actually terminated by their employers. 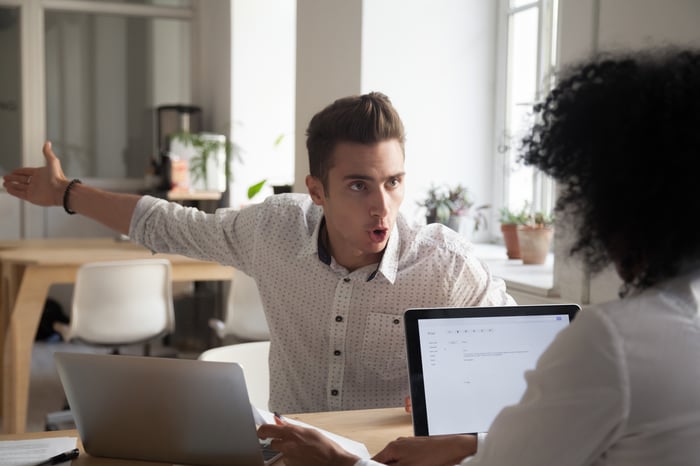 If you've been a victim of workplace bullying, you should know that you don't have to take it lying down. And the sooner you stand up for yourself, the less you'll suffer needlessly on the job.

1. Document all incidents of bullying

If your colleagues or manager have been treating you poorly, it's time to start establishing a record of that bad behavior. From now on, write down the date, time, and details of every incident that involves bullying. Be sure to list the people involved, and include any witnesses who might be willing to corroborate your story. Along these lines, save all emails that contain inappropriate or overly harsh language.

Your HR department is there for a reason -- to protect you from mistreatment that violates company policy. If it's your colleagues who are doing the bullying, your first step can actually be to go to your boss, who might then call a meeting with HR to discuss things further. But if your manager is the problem, HR is your best bet, and you'll want to bring the aforementioned bullying record with you to shed light on the situation.

3. When all else fails, seek legal action

Depending the nature of the bullying in question, you may have an actual legal complaint on your hands. If you bring the matter to HR and no action is taken on your employer's part, then you may want to consult an employment lawyer to further advise you.

Being bullied at work can be a miserable situation. If your boss or colleagues treat you poorly by calling you names, shaming you in public, sabotaging your work efforts, or engaging in other behavior that's clearly inappropriate, don't let things reach the point where you dread going to the office every day. Instead, take steps to fight back.