Please ensure Javascript is enabled for purposes of website accessibility
Log In Help Join The Motley Fool
Free Article Join Over 1 Million Premium Members And Get More In-Depth Stock Guidance and Research
By Maurie Backman - Oct 25, 2019 at 6:32AM

Dissembling about what you're good at won't get you very far.

If you're in the market for a new job, you're probably aware that a solid resume could be your ticket to an exciting offer. Specifically, the skills you detail on your resume could drive recruiters to your door.

But new data from Monster shows that candidates aren't always truthful when listing their competencies. In fact, 85% of recruiters feel that candidates exaggerate their skills on their resumes, and as such, make the hiring process more difficult. Not only that, but two-thirds of recruiters think applicants misrepresent their skills during the hiring process as a whole.

If you're eager to land a new job, it pays to be truthful about the work skills you possess. Misleading recruiters or hiring managers could wreck your chances of getting hired and damage your reputation in the process. 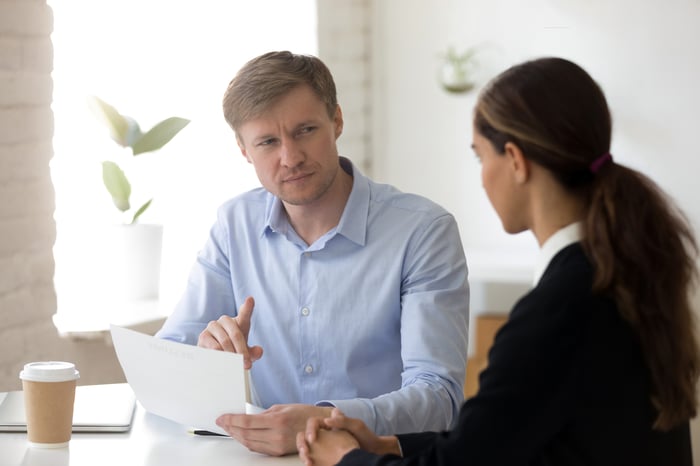 Talk up your skills, but don't be untruthful

It's a good idea to highlight the things you're good at when applying for jobs. Those might include role-specific skills, like programming languages or financial modeling software, or soft skills that apply universally, like time management and communication. But one thing you shouldn't do is list skills you don't really possess. In doing so, you could end up misleading recruiters or hiring managers to the point where they write you off in the future for being dishonest.

Imagine you write on your resume that you're proficient in an accounting software that you've really only dabbled in. Chances are, your knowledge gaps will come through in a live interview, at which point you may be tossed out as a candidate for not being truthful. A better bet, therefore, could be to state that you have beginner's knowledge of the program but indicate that you're a quick learner, and see if the company that's hiring is willing to work around that or to train you.

Of course, you might manage to uphold the charade that you're proficient in key skills during the interview process, and land a job offer as a result. The problem with that, however, is that if your shortcomings become evident soon after you're hired, your employer might let you go. And that same employer might resolve to never hire you again because you didn't come clean about your skill set.

The takeaway? Though there's nothing wrong with talking up the skills you possess, both on a resume and during a job interview, don't cross the line into lying. If you have minimal experience with a certain software package, don't claim to be well-versed in it. You never know when slighting a single recruiter could land you on other headhunters' blacklists, and you certainly don't want to get banned indefinitely from applying to a company you're eager to work for.

In fact, the next time you find that you're lacking key skills for a job you want, use it as an opportunity to go out and learn them. That way, you'll have an easier time being completely honest the next time you apply for a new role.