Please ensure Javascript is enabled for purposes of website accessibility
Free Article Join Over 1 Million Premium Members And Get More In-Depth Stock Guidance and Research
By Maurie Backman - Oct 27, 2019 at 6:36AM

If you're one of them, it's time to rethink it.

There are certain behaviors at work that can lead others to think less kindly of you. For example, if you're a disorganized person who constantly misses deadlines, you may get pegged as unreliable. And if you're the type who tends to shoot down other people's ideas and refuse outside input, you may come off as stubborn or a know-it-all. But there's one workplace habit that your colleagues might loathe even more: your tendency to come to the office while sick.

It's not an uncommon practice. Global staffing firm Accountemps says that 90% of professionals show up to the office sick at least sometimes. And of that 90%, 33% always come to work when they're sick.

If you've been dragging yourself into the office when you're really not well, you should know that the folks around you probably don't appreciate it -- and put an end to that unhealthy habit. 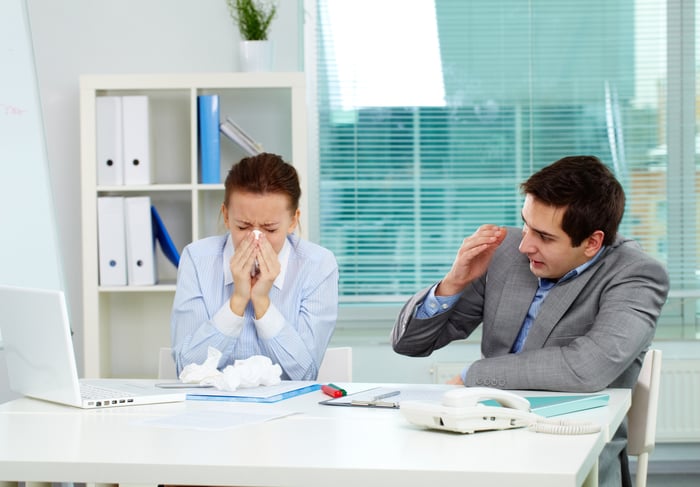 Why do employees come to work sick?

First, let's be clear: There's a difference between harboring a mild cold or lingering cough and actually being sick. If you're largely feeling like yourself despite a few bothersome symptoms, coming to work is a fairly reasonable thing to do, particularly if there's no fever involved. But if you're hacking up phlegm, dealing with a stomach bug, or effectively feel like your body was slammed into by a bus, then it's a sign that you don't belong at the office, but rather, in bed at home.

Still, an overwhelming majority of workers force themselves to come to the office when they're truly not well, and the reasons aren't surprising. According to Accountemps, 54% of employees who show up to work with bad cold or flu symptoms do so because they can't afford to fall behind on their responsibilities. Meanwhile, 40% don't want to use up their sick days.

Then there's the 34% of workers who say they feel pressure from their employers to come to work even when they're sick. And 25% of workers show up sick because their colleagues do the same thing.

Here's the problem, though: When you come to work sick, you often wind up infecting other people and doing a poor job because you're too ill to focus. Not only that, but you risk incurring the wrath of the people around you who aren't interested in catching your germs.

A better bet? Stay home when you're sick, and give yourself a chance to recover. If you're worried about your workload, do what you can from home. Check emails, work on presentations, and hammer out reports from your living room couch or bed, where you won't risk spreading whatever ailment you're grappling with. And if you're worried about using up too much time off, talk to your manager about making up those days by coming in on a weekend when you're feeling better.

Going to work while sick is a bad idea, no matter your reason for doing it. The next time you're truly ill-equipped to drag yourself into the office, call out and keep your germs to yourself. Your colleagues will thank you for it.