Each year, countless workers eagerly await the December time frame, not just because of holiday time off, but because that's when they're given their bonuses. And make no mistake about it: Some people rely on those bonuses to pay their bills, cover holiday expenses, or boost their savings.

If you're anticipating a bonus from work this year, here's some good news: An estimated 48% of employers that routinely give out year-end bonuses plan to increase them this season, reports staffing firm Robert Half. Meanwhile, 48% of companies expect this year's bonuses to be comparable to last year's, and only 4% of employers anticipate reducing bonuses this year.

That's good news for the 52% of workers who expect to receive a bonus. And if you're one of them, it's potentially good news for you, too. 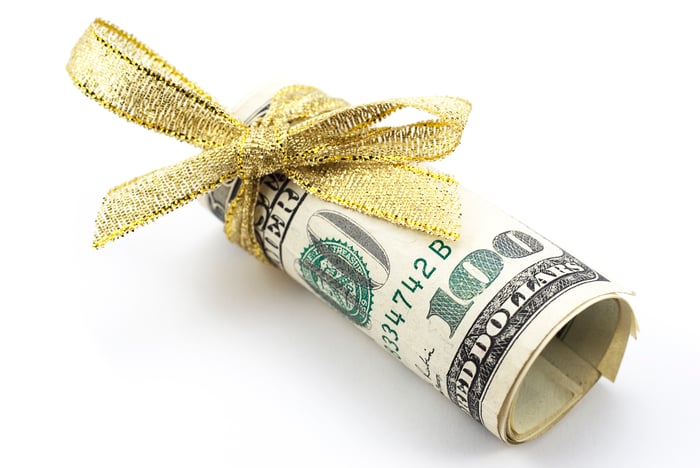 Put your bonus to good use

Bonuses, as the name implies, aren't guaranteed, so if you're fortunate enough to get one, it pays to make the most of that money. To that end, you'll need to assess your savings to see if you can afford to spend that money versus stick it directly in the bank.

Robert Half reports that 52% of bonus recipients intend to use that extra money to add to their long-term savings, such as an IRA or 401(k). That's certainly not a bad idea if your nest egg could use a boost. But before you send that money into a retirement account, see how you're doing on emergency savings. If you don't have enough money in the bank to cover three to six months of essential living expenses, you're actually better off using your bonus to pad your near-term savings, and then focusing on retirement once your emergency fund is complete.

On the other hand, you may be tempted to just plain enjoy some of that money. According to Robert Half, 47% of bonus recipients plan to use their extra money to take a vacation in the new year, while 46% say they'll use it to do their holiday shopping. And another 46% say their bonus will help them pay off debt.

Clearly, this means that those who get a bonus expect to use it for more than one purpose. If you're doing well on emergency and retirement savings, there's certainly nothing wrong with using some of that money for a much-needed getaway, or to indulge during the most popular shopping season of the year. And if you're in debt, paying it off is a great use of that cash. But be careful not to blow that money if you have more pressing goals to address.

Don't spend that bonus before it lands in your bank account

No matter what you expect to do with your year-end bonus, don't spend any of that money until you see what it actually amounts to once it lands in your bank account. Remember, bonuses are taxed differently than regular wages, so a $2,000 bonus won't be $2,000 in usable cash, and the total amount you wind up with may be less than you expect based on your typical tax rate.

Finally, don't assume that you're getting a bonus, or a bonus in a certain amount, until your employer confirms that that's the case. Even if you've gotten a $2,000 bonus every year for the past five, you never know when your company might have to cut back, whether by shrinking your bonus or not handing one out at all. And even though nearly half of companies are expecting an increase in their bonuses this year, you can't assume that yours will be one of them, so don't make any solid plans until your bonus payment is made official.