Please ensure Javascript is enabled for purposes of website accessibility
Log In Help Join The Motley Fool
Free Article Join Over 1 Million Premium Members And Get More In-Depth Stock Guidance and Research
By Maurie Backman – Feb 28, 2020 at 8:02AM

Millions of Americans struggle with work-life balance, and understandably so. In today's "always on" culture, it's hard to truly unplug when job-related emails, chat app messages, and phone calls take us away from our personal lives and effectively force us to deal with work matters at all hours. And let's not gloss over the fact that for many workers, putting in 40 hours a week is no longer sufficient. It's common practice to work well beyond the standard eight hours a day, especially in competitive environments that value face time.

But a new work-related concept that can help American employees achieve better balance may be gaining traction: the four-day, 32-hour workweek. It's a practice that's been growing increasingly popular on a global level, and some U.S. companies, like Shake Shack (SHAK 5.02%), are trying it out as well. The best part? They're letting employees work fewer hours without cutting their pay. 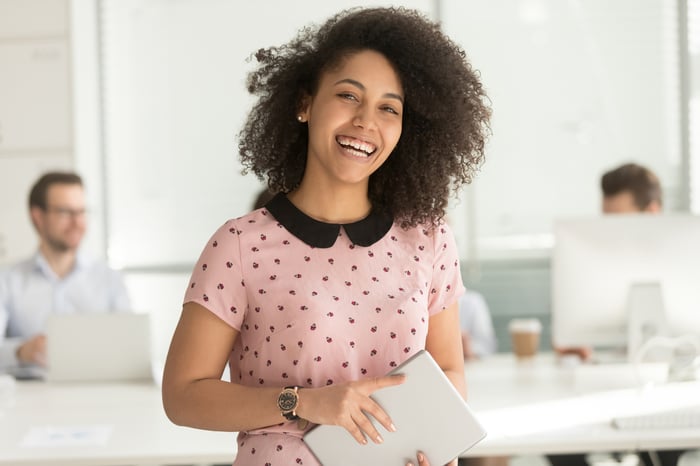 What's the upside on the employer end?

It may seem odd to see companies offer employees the flexibility of a 32-hour workweek in a day and age when it's common practice to put in a lot more time than that. But actually, offering this perk without any pay-related repercussions is a great way for companies to attract talent, retain existing talent, and motivate employees to make the most of their time while they're actually on the job.

Of course, this setup is great for workers, too. For many employees, working one fewer day per week could translate into a host of benefits such as savings on child care, lower commuting costs, and better physical and mental health (not having to get up early for work an extra day is a perk by itself). And given that burnout is a major issue in today's workforce (at least the U.S.'s version of it), by mandating fewer hours, companies can reduce the number of employees who ultimately suffer from it.

Furthermore, there are studies out there that promote a link between general happiness and productivity. Employees who are given the option to work a bit less may find that they're more content on a whole, and that positive shift in attitude could lead to better output while they're on the job.

Will the 32-hour workweek become the norm?

We're still worlds away from replacing the standard 40-hour workweek (or more) with what many believe is a new, improved, and shorter version. And in some industries, like finance or law, persuading companies to reduce their employees' hours may be an extremely hard sell. But one thing's for sure: The fact that more and more companies are adopting a shorter workweek is good news for employees on a whole. If anything, it's indicative of the fact that employers are recognizing the need for better balance, and that workers deserve a life outside the office.