Please ensure Javascript is enabled for purposes of website accessibility
Log In Help Join The Motley Fool
Free Article Join Over 1 Million Premium Members And Get More In-Depth Stock Guidance and Research
By Maurie Backman - Mar 24, 2020 at 8:02AM

With so many employees working from home, it could pave the way to more long-term remote arrangements.

If there's one thing health advisors have been advocating since COVID-19 evolved into a very real threat in the U.S., it's the need to socially distance. As such, countless employers have already embraced the idea of remote work, allowing employees to log on from the safety of home rather than run the risks of being near others in an office.

For many, it's been an adjustment so far, especially among those who aren't used to doing their jobs from home. But as more and more companies get used to having remote staffs and work out the technology glitches required for them to thrive, will remote work become more of a long-term thing once employers realize how feasible it actually is? 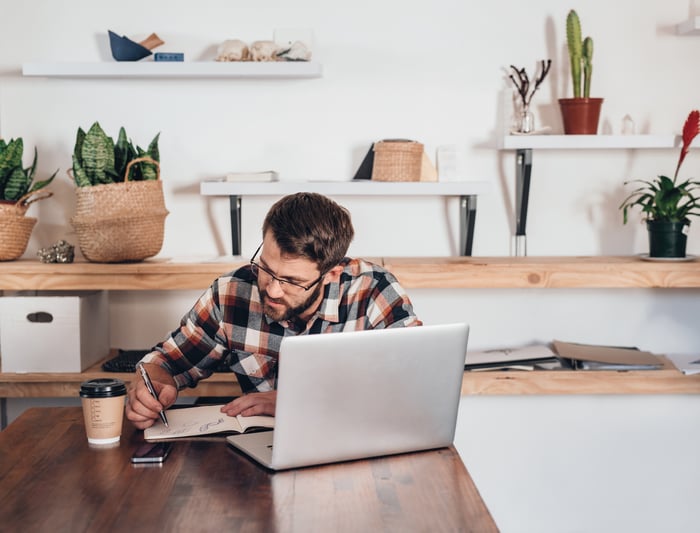 The benefit of remote work

Employers often hesitate to let employees work from home for fear that their productivity will wane and their communication will suffer. But if these past few weeks have taught us anything, it's that many of today's workers are adaptable to new arrangements and are capable of maintaining their output despite having been thrown into a completely new setup. As such, more companies may consider extending work-from-home arrangements once the COVID-19 crisis eases up and it once again becomes safe to return to an office.

Of course, some employees are learning the hard way that working from home just isn't for them. Many are finding themselves stir-crazy, missing the social outlet that office live serves as.

But those who are now thriving in their at-home work environments may be well-positioned to make the case to retain them once things go back to normal. And at that point, both employees and employers stand to benefit.

On the employee side, not having to report to an office daily means time and money saved by not having to commute. It can also make for a better work-life balance.

For employers, allowing remote work could result in improved productivity from their staff. Employees who spend hours commuting could instead use that free time to tackle projects or boost job skills. And those who would normally grumble about logging on after hours or tackling emergency requests on weekends may be less inclined to push back on those last-minute, somewhat intrusive requests once they're granted the flexibility to do their jobs without having to leave the house.

Right now, companies everywhere are dealing with a forced shift to remote work. And to be fair, working parents are largely dealing with an unprecedented situation where they're forced to toggle between conference calls and child care responsibilities, making things even more challenge. But once life slowly but surely reverts to its former state and working from home becomes more optional, we may see an uptick in employers who are willing to grant workers that key piece of flexibility.