Please ensure Javascript is enabled for purposes of website accessibility
Log In Help Join The Motley Fool
Free Article Join Over 1 Million Premium Members And Get More In-Depth Stock Guidance and Research
By Jason Hall - May 23, 2016 at 7:52PM

Westport and Clean Energy Fuels have surprisingly little in common with one another.

Clean Energy Fuels is moving forward, while Westport Innovations has had trouble getting in gear.

If you follow the investing world of natural gas vehicles (NGVs), you're familiar with Westport Innovations Inc. (WPRT 4.63%) and Clean Energy Fuels Corp. (CLNE 0.00%). And if you were to go by this stock chart, you'd probably think these two companies have a lot -- and a lot of troubles -- in common: 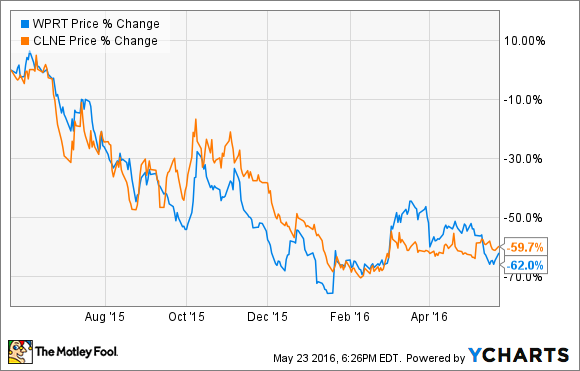 And while the two share some things in common, they are very different businesses. Between the two, one is a great opportunity to buy today, while the other has some major hurdles ahead of it.

What makes them different

Both Clean Energy Fuels and Westport Innovations are married to the success of natural gas as a transportation fuel, and both companies have invested (and lost) tens of millions of dollars in recent years, but that's essentially where what they have in common ends.

Westport is an equipment maker and counts on selling engines, accessories, and components to original equipment manufacturers -- or OEMs -- for the bulk of its revenues. The company does get some recurring maintenance and support sales, but its business is largely about selling widgets. However, the widget business for NGVs hasn't been very good for the past year, particularly as weak economies in Asia and Europe have hurt those markets, while low oil prices have slowed adoption nearly everywhere.

Clean Energy Fuels, on the other hand, sells fuel; builds, maintains, and supports natural gas refueling stations; and manufactures refueling equipment. Of these businesses, by and far the biggest is the refueling segment. This also happens to be a source of recurring revenue, as all those existing fleets of natural gas vehicles continue to need fuel to operate.

Clean Energy's recurring revenue business has allowed it to ride out the downturn, while Westport continues to feel the impact of weak demand for new NGVs.

And those differences give us two businesses with different trajectories

Westport management has done an admirable job of cutting costs over the past couple of years. But as much as the cost-cutting has helped, Westport's expenses are still significantly higher than the company's cash generation. Even after substantial reductions in recent quarters, the math is ugly. Last quarter, Westport generated $26 million in direct revenue and income from its joint ventures but reported expenses of almost $43 million. That's not close to sustainable, and the company is quickly burning through its cash reserves.

Furthermore, the company's HPDI 2.0 technology, on which it's working with Delphi Automotive to bring to market, isn't likely to be driving meaningful commercial sales before sometime in 2017, though it is set to launch this year.

Clean Energy Fuels has also cut costs over the past year, reducing its sales, general, and administrative expenses more than 20% last year while fuel volumes and per-gallon fuel margins increased. The company also cut capital expenditures in half in 2015 and is on track cut capex by half again this year. The company has also paid down a significant portion of its long-term debt this year and expects to spend about 25% less on interest expense in 2016.

These factors combined are why Westport and Clean Energy's financial performances are heading in different directions: 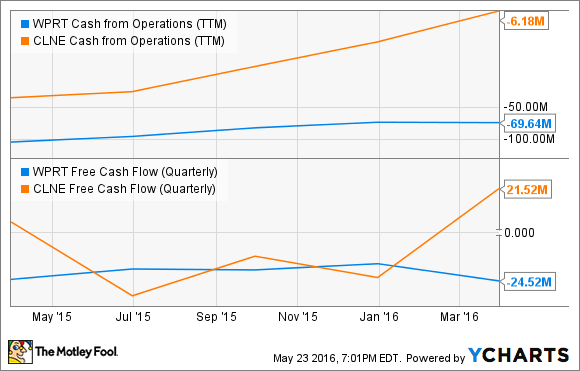 Minding the GAAP, or why cash is king

Both Westport and Clean Energy Fuels have spent gobs of cash over the past several years. The difference is that much of Westport's cash has been spent on research and development expenses that have yet to pay off in strong sales, while Clean Energy has invested much of its cash in long-lived capital assets, primarily refueling stations: 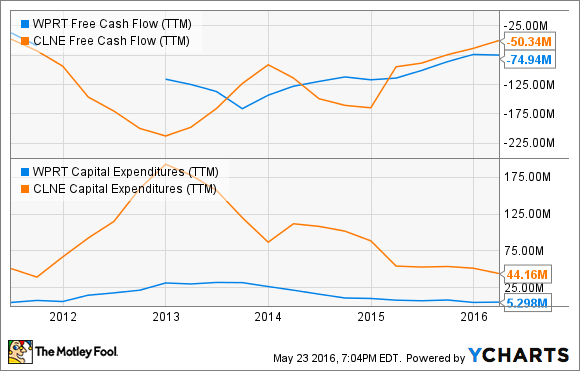 Why does this matter? Because Clean Energy's refueling volume has doubled since 2011 on the back of tripling the number of stations it owns and operates, while Westport's R&D investments have yet to generate any sustained, meaningful sales or profits.

Furthermore, Clean Energy will also continue to get a tax-saving benefit from all that capital spending in the coming years. Last quarter, the company reported nearly $15 million in depreciation and amortization expense tied to those previous capital expenditures. And while it may show up as an expense, it's non-cash, so it doesn't hurt the company's liquidity. This may keep GAAP profits from growing as quickly, but it will only help free cash flow.

Clean Energy an overlooked opportunity; Westport worth watching, but not time to buy

Clean Energy still has about $80 million in debt it must retire by August, which could lead to dilution if the company uses stock to retire that debt. But fuel sales continue to grow, with transportation fuel volume increasing 8% last quarter even as oil prices stay low. Yet even at its lowest, diesel still cost more than natural gas, and Clean Energy's recurring revenue stream has carried the business through the downturn bigger and stronger than it entered it.

Westport, on the other hand, is counting on a merger with Fuel Systems Solutions to improve its prospects. Fuel Systems shareholders vote on May 31, and at least one co-founder has come out against the deal, though it's looking more likely than not that the vote will pass. But until the merger, which will provide much-needed cash, is completed, and we get some idea of what the combined business will look like, Westport's standalone business is too risky an investment today.